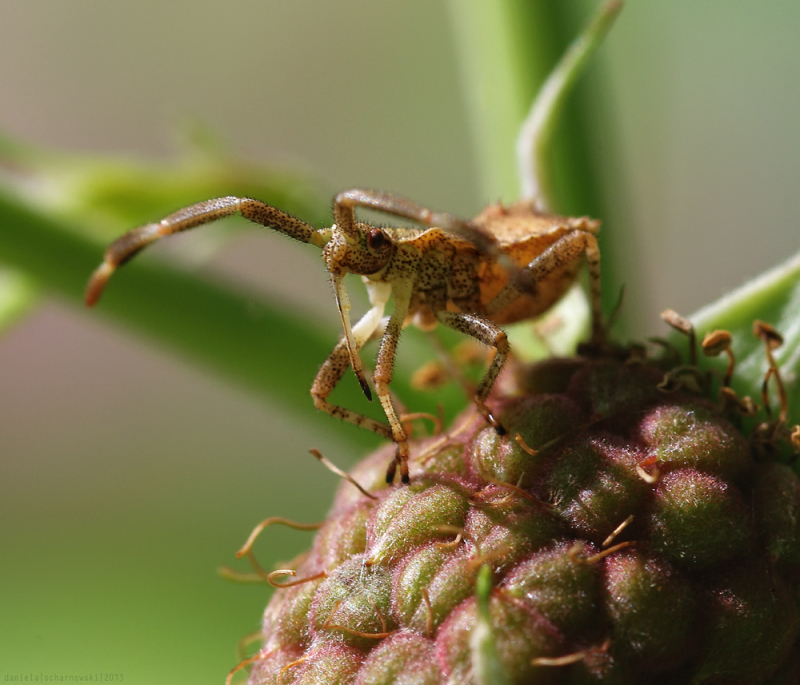 Posted by daniela (Berlin, Germany) on 14 September 2013 in Animal & Insect and Portfolio.

Coreus marginatus (Saumwanze/Lederwanze in german) is a herbivorous species of True Bug in the family Coreidae. It is commonly known as the dock bug as it feeds on the leaves and seeds of docks and sorrels. It is a medium-sized speckled brown insect, between 13 to 15 mm long as an adult, with a broad abdomen. It occurs throughout Europe, Asia and northern Africa. It is often found in dense vegetation, such as hedgerows and wasteland.
...
Like other Coreidae the dock bug has an annual life cycle consisting of an egg followed by five successive nymphal instars before becoming an adult. It overwinters as an adult and copulates in the typical heteropteran back-to-back postion, laying large brown eggs between late May and early July. The eggs take around 3 to 4 weeks to hatch. The young nymphs will feed on leaves and stems while the older nymphs, like the adults, feed on seeds. The nymphs mature to adults from August onwards. wiki
Read on

### I´ll be having my on and off´s here in future due to my work situation, but I hope the pauses won´t be too long again. Love, Daniela ###

Splendid macro and excellent POV! Thanks for the information. Last summer we had many sunny days and I got very interested in determinating and photographying insects. It's thrilling to see the different nymphal stages and to learn more about the nature around us!