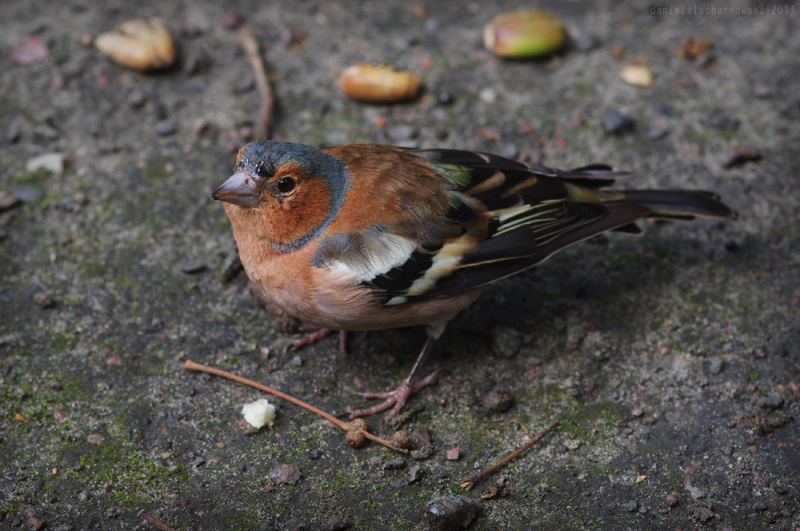 Posted by daniela (Berlin, Germany) on 10 September 2013 in Animal & Insect and Portfolio.

or the Common Chaffinch (Buchfink in german), usually known simply as the Chaffinch is a common and widespread small passerine bird in the finch family. The male is brightly coloured with a blue-grey cap and rust-red underparts. The female is much duller in colouring but both sexes have two contrasting white wings-bars and white sides to the tail. The male bird has a strong voice and sings from exposed perches to attract a mate.

The Chaffinch breeds in much of Europe, across Asia to Siberia and in northwest Africa. It prefers open woodland and often forages on the ground. The female builds a nest with a deep cup in the fork of a tree. The clutch is typically 4–5 eggs, which hatch in about 13 days. The chicks fledge in around 14 days but are fed by both adults for several weeks after leaving the nest. The Chaffinch is a partial migrant; birds breeding in warmer regions are sedentary while those breeding in the colder northern areas of its range winter further south. read on

You seem to be surprisingly close to this little bird - chaffinch are not this 'tame' for me.

@Ronnie 2¢: I had some bread to trick him coming close ;)