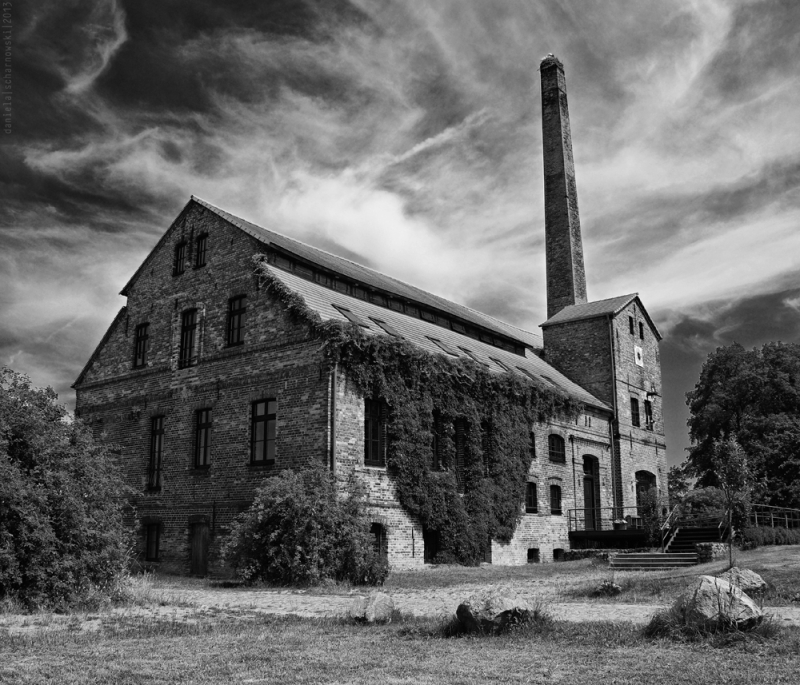 Posted by daniela (Berlin, Germany) on 15 July 2013 in Architecture and Portfolio.

Around 1850 the Ribbeck family built this distillery, where they produced some kind of potato booz ( about 114.000 liters /year) until the Nazis banished the family from their properties.

The head of the family Hans von Ribbeck was declared a public enemy and died in Sachsenhausen KZ 1945 - he didn´t care about hiding his feelings towards Hitler.
There are lots of anecdotes regarding his behaviour, my favourite one is that he apparently drew pictures of pigs with big ears with his cane in the sandy ground when he was in presence of those nasty nazi people.
He was also arrested earlier in connection with the Night of the Long Knives but came free.

During the GDR era this building was used as a garner - until 1994, sadly nothing was done to keep the old building in shape. The Ribbeck family bought it back in 2001 and restored it by hand since.
In 2006 the old distillery was restored successfully and is now used as Jazz venu as well as a pear vinegar production facility, and of course some liquors.

The chimney is the regular place for a stork nesting place ;)

I love this building, the stork a bonus and the story about the family makes it very special

It seems so unreal!

This series of building photos is amazing! Nice work Daniela

Beautiful building, gorgeous black and white. Have a nice day.

The photo is large and wants to leap off the screen, the power of the black and white
clouded architecture is a barrier of mystery but yet exudes extreme beauty !!~ 5*****

Impressive old building, a bit spooky too. Great in black and white.

Really beautifully composed in monochrome, a lovely old building and wonderfully restored in memory of a man who sounds as if he was far to brave to be intimidated by a bullying order

This is beautiful. Wonderful contrast and detail

superb composition this one! really like the majesty and stature of the building with wonderful straight lines! the tonal range is excellent!

So wonderful to see again, the way you weave your haunting story is almost tantamount to
this photo and yet it speaks for itself in its glory, which you have told in black and white,
so very beautiful !