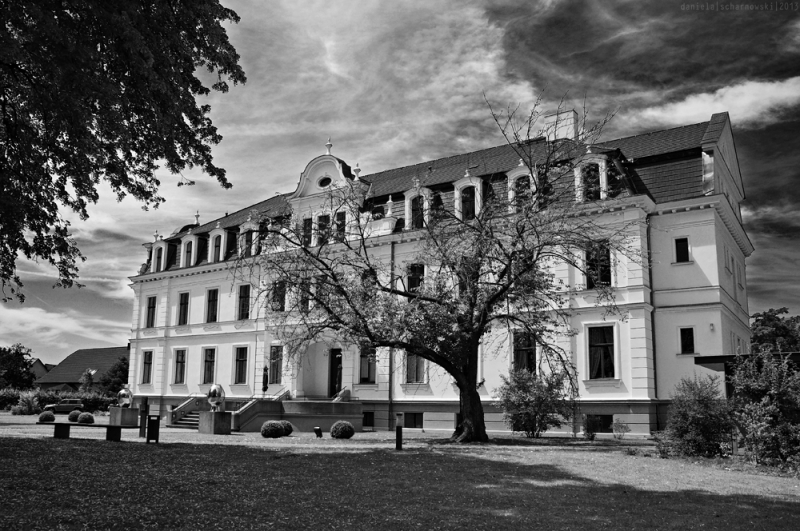 Posted by daniela (Berlin, Germany) on 12 July 2013 in Architecture and Portfolio.

or the Herrenhaus Ribbeck - also called Schloss Ribbeck.
Was build in 1893 by Hans Georg Hennig von Ribbeck, before that the von Ribbeck family had built other houses in this place.

This family got really famous for the beautiful ballad by Theodor Fontane, which is still taught at schools in (northern) Germany -

There are various translations of this ballad online - you can find here: www.vonribbeck.de/html/ribbeck_international.html

Squire von Ribbeck at Ribbeck in Havelland,
In his garden there stood a pear tree grand,
And when autumn came round, the golden tide,
And pears were glowing far and wide,
Squire von Ribbeck, when noon rang out, would first
Fill both his pockets full to burst.
And then, when a boy in his clogs came there,
He called: ”My lad, do you want a pear?”
He would hail a girl that chanced to pass:
“Come over, I have a pear, little lass!”

Many years thus went, till the noble and high
Squire von Ribbeck at Ribbeck came to die.
He felt his end. It was autumntide.
Again pears were smiling far and wide.
“I depart now this life” von Ribbeck said.
I wish that a pear in my grave be laid”.
And after three days, from this mansard roofed hall,
Squire von Ribbeck was carried out, `neath a pall.
All farmers and cottagers, solemm-faced,
Sang: ”Jesus, in Thee my trust is placed”,
And the children lamented, with hearts like lead:
“Who`ll give us a pear, now that he is dead.?”
So the children lamented. It was unkind,

As they did not know old Ribbeck´s mind.
True, the new one is skimping niggardly,
Keeps park and pears tree `neath lock and key;
But having forebodings, the older one,
And full of distrust for his proper son,
Knew well what he did, when the order he gave,
That a pear should be laid in his grave.

From the silent dwelling, after three years,
The tip of a pear tree seedling appears.
And year after year, the seasons go round,
Long since a pear tree is shading the mound.

And in the golden autumntide
Again it is glowing far and wide.
When a boy is crossing the churchyard there,
The tree is whispering: Want a pear?”
And when a girl chances to pass,
It whispers: “Come here for a pear, little lass.”

Thus blessings still dispensses the hand
Of von Ribbeck at Ribbeck in Havelland.

A beautiful tale and a wonderful manor, I wonder what happened here though when the Soviets
came into power after the war and then left it a retirement home. I hope that it found a good
new buyer when it went up for sale, it seems in good repair now. Beautiful photo, Daniela !~

@Phil Morris: The family von Ribbeck wanted it back after the fall of the GDR, and then they somehow gave in and it did go to the community of this district (Havelland/Brandenburg), it has been restored beautifully (some pics will follow as soon as I have time) and now contains a museum, which shows exhibitions about the life of Theodor Fontane, beautiful old family portraits (just copies) of the von Ribbecks and the archaeological findings from the parking space dig - then there´s a restaurant and a civil registry office, where weddings are held, very beautiful the whole complex. The Ribbeck family owns two houses in the village, close to the manor, where they live.

What a fine house, I could easily live there. :)

excellent context provided with the poem! while i am learning some basic german i am glad for the english version so that i can understand it better :-) great photo too - love the contrast, sharpness and detail!