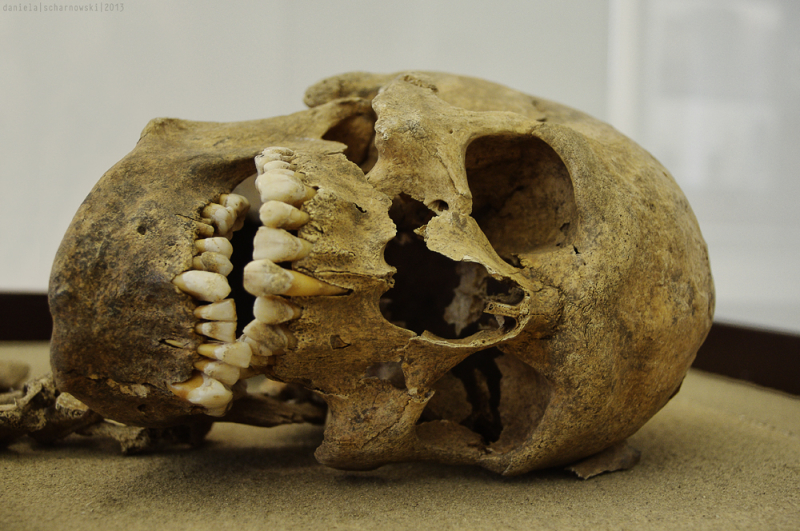 Posted by daniela (Berlin, Germany) on 11 July 2013 in Lifestyle & Culture and Portfolio.

About 900 years ago, this young hevellian man died in the Havelland region near the village of Ribbeck, we visited last sunday.
His and 35 other graves were found when the village was preparing the ground for a parking space in 2011. (Very much like the finding of Richard III).

It was a giant and unsuspected archaelogic find, with beautiful vases and pottery as burial objects. I think it was the only slavic burial place they found in this area.
Interestingly the graves were layed out east-west (the heads pointed western), so they concluded there must already have been a christian influence, but burial objects aren´t a christian habit.

About this specific man they found out he must have had terrible pain from his teeth - the cause of death they couldn´t determine, but he must have been 21 years old they say. They also couldn´t locate the slavic village until now, but they are sure it must have been in a radius of 1 km from the burial site.

When digging through the whole area, they also found an old smelting place from the germanic tribe who lived there before the slavs (they left this area in the 7th-8th century), and one extremely rare bronze needle from before that, about 3000 years old. That one was send to the State Museum.

Poor guy must have suffered with those teeth, I find it amazing there is a scull left, and more
amazing when you read of people who died in 1912 for instance that when they dig up the
grave they find one small bone left and barely enough for dna, and others absolutely nothing
left at all !~

@Phil Morris: It all depends on the kind of earth the bones are in and other circumstances. The specific spot he was buried is mostly of clay and a tad of sand - so these bones were protected from water and air and therefor are better preserved than others. No insect larvae or lots of microorganisms in this kind of ground.

I'm fan of seeing and to know about archaeological sites ... Great shot and very interesting information !!! Thanks for sharing ...