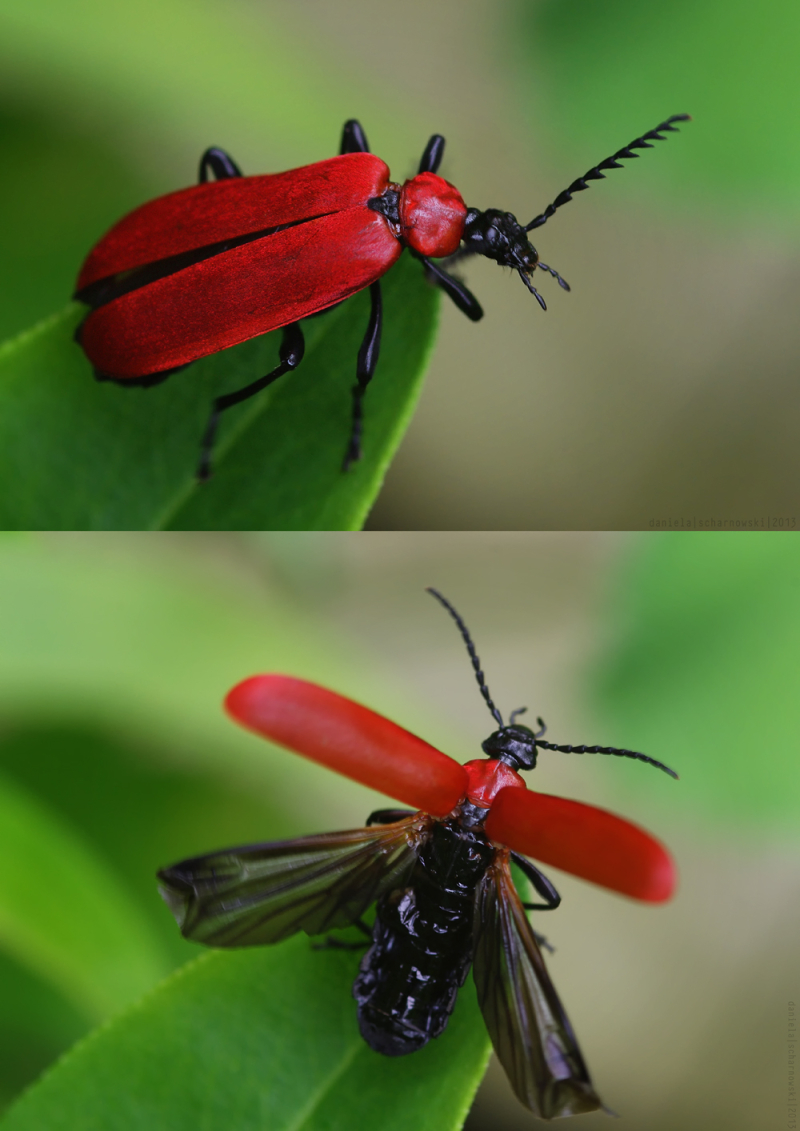 Posted by daniela scharnowski (Berlin, Germany) on 29 June 2013 in Animal & Insect and Portfolio.

"The name cardinal beetle typcially refers to three three different species of beetle.
The Red-headed or 'Common' Cardinal beetle (Pyrochroa serraticornis) is a red to orange beetle with, as the name suggests, a red head. It is approximately 20mm long and found throughout Britain.

Cardinal beetles prey on other insects and are normally found on flowers at the edges of woodland. Their bright red colour protects them from predators which believe it to be toxic.

People often mistake the smaller scarlet lily beetle, Lilioceris lilii, for a cardinal beetle as they also have a black underside and wings that are spotless and red. However, the scarlet lily leaf beetle's wing cases have tiny dimples and are shinier and more rounded than the dull, narrow, flattened and elongated cardinal beetle. The beetles can also be distinguished by the cardinal's toothed antennae. Another difference between the two is their diets: Scarlet lily leaf beetles are herbivores and are usually found eating lily leaves, whereas cardinal beetles are usually found on tree bark and flowers and feed on flying insects." wiki

@Tede: merci beaucoup mon ami! he was so scared after seeing the big black thing right above him, he flew away - avoiding a heart attack :D

He has a beautiful red coat! lol! Very nice macro!

Excellent macro and great takeoff capture of this beautiful bug ... the colors are wonderful !!!

Great shot of these, i am sure I have confused the lily beetle on occasion I will look more carefullly now

@Christine: Honestly, this "fact" I find hard to believe - since the nasty scarlet lily beetles are so very small compared to these guys - I spotted him from 6 meters away and thought what lovely red flower is showing there - he is about 2 cm long and nearly a centimeter wide - the lily beetles at their best will get 9 mm in length, 6 mm is more common - that´s a huge difference :)

Excellent macros! You are right, this beetle looks very much like the scarlet lily beetle, my dear enemy. :)