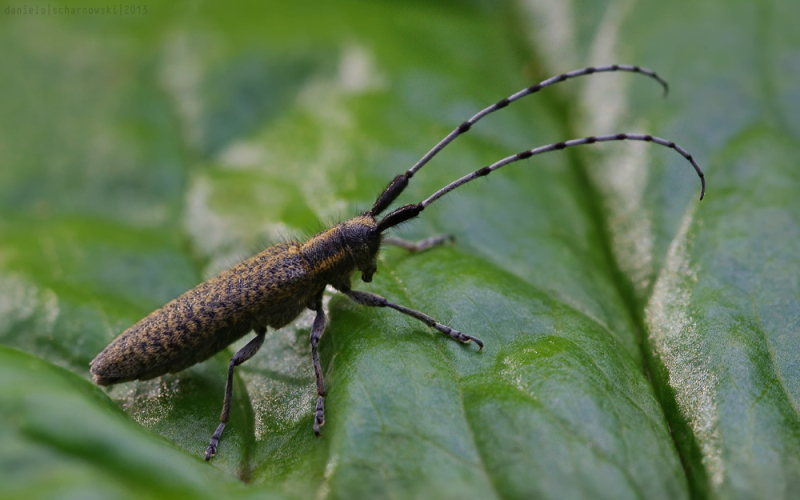 Posted by daniela scharnowski (Berlin, Germany) on 28 June 2013 in Animal & Insect and Portfolio.

Agapanthia villosoviridescens, also known as the golden-bloomed grey longhorn beetle [ in german known as Scheckhorn-Distelbock, Nesselbock oder Linienhalsiger Halmbock], is a species of beetle in the Lamiinae subfamily, that can be found in the Caucasus, Europe, Kazakhstan, the Near East, Russia and Turkey.

The beetle is named for its golden-black colour, with a golden bloom on its elytron and thorax. It reaches a length of 10–22 millimetres (0.39–0.87 in).

Their flight time is from May to August. For the larval development the species is quite polyphagous with a wide variety of hosts, probaly including Aconitum, Angelica, Anthriscus, Artemisia, Aster, Carduus, Cirsium, Chaerophyllum, Eupatorium, Foeniculum, Gentiana, Helleborus, Heracleum, Peucedanum, Salvia, Senecio, Urtica and Veratrum album. The larvae develop in the stalks of the host plant, working their way down while growing, cutting off the stalk and creating pupal cells near ground level. Adults emerge through a newly cut exit hole in the side of the stalk. wiki

I´ve never seen this species before, so much fun to watch him.

Amazing creepy crawlers, I am so happy not to have seen these ones, I'm not too
fond of footlong antenna, but makes for a magnificent photo !~

@Phil Morris: His antennas are under 1 inch, so don´t you worry :)

Always impressive to see these insects so close... Perfect shot!

Your macro photos are an excellent (and safe!) representation of a world I willingly ignore. You're in danger of inspiring me to go bug hunting.

@digitalCG: Tally Ho then! But beware - it starts harmless, but before you will know it, you´ll suffer from a serious addicton, scanning every bush and leaf for hiding insects, crawling in the dirt, making yourself the object of laughter from friends and family. ;)