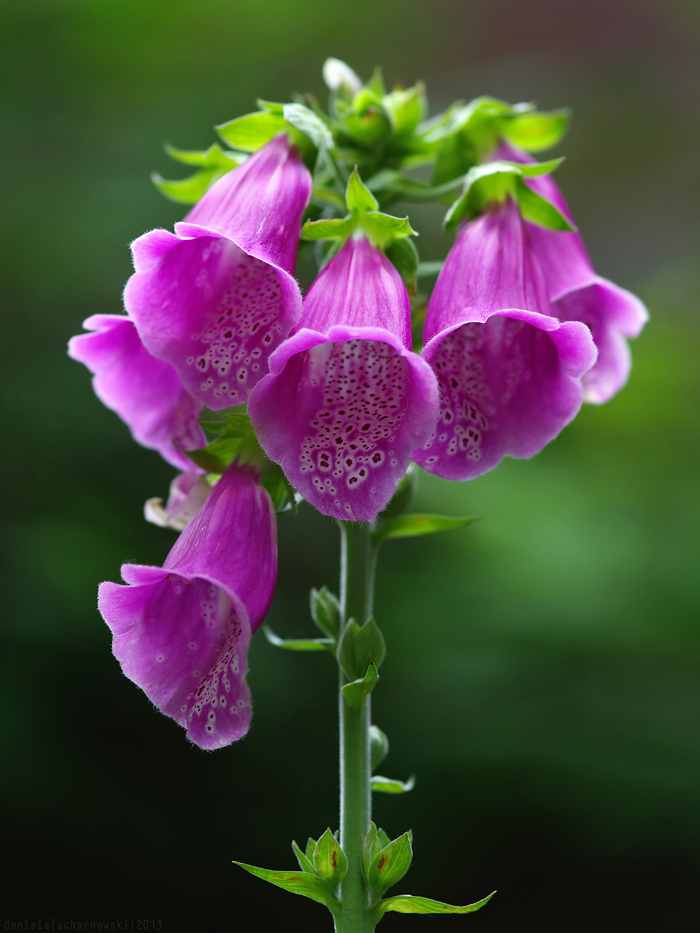 "Digitalis purpurea (foxglove, common foxglove, purple foxglove or lady's glove // Roter Fingerhut in german), is a species of flowering plant in the genus Digitalis, in the family Scrophulariaceae, native and widespread throughout most of temperate Europe. It is also naturalised in parts of North America and some other temperate regions. The plants are well known as the original source of the heart medicine digoxin, (also called digitalis or digitalin).
Digitalis purpurea is an herbaceous biennial or short-lived perennial plant. The leaves are spirally arranged, simple, 10–35 cm long and 5–12 cm broad, and are covered with gray-white pubescent and glandular hairs, imparting a woolly texture. The foliage forms a tight rosette at ground level in the first year.

The flowering stem develops in the second year, typically 1 to 2 m tall, sometimes longer. The flowers are arranged in a showy, terminal, elongated cluster, and each flower is tubular and pendent. The flowers are typically purple, but some plants, especially those under cultivation, may be pink, rose, yellow, or white. The inside surface of the flower tube is heavily spotted. The flowering period is early summer, sometimes with additional flower stems developing later in the season. The plant is frequented by bees, which climb right inside the flower tube to gain the nectar within.

The fruit is a capsule which splits open at maturity to release the numerous tiny (0.1-0.2 mm) seeds.
Due to the presence of the cardiac glycoside digitoxin, the leaves, flowers and seeds of this plant are all poisonous to humans and some animals and can be fatal if eaten.

Extracted from the leaves, this same compound, whose clinical use was pioneered as digitalis by William Withering, is used as a medication for heart failure. He recognized it "reduced dropsy", increased urine flow and had a powerful effect on the heart. Unlike the purified pharmacological forms, extracts of this plant did not frequently cause intoxication because they induced nausea and vomiting within minutes of ingestion, preventing the patient from consuming more.

The main toxins in Digitalis spp. are the two chemically similar cardiac glycosides: digitoxin and digoxin. Like other cardiac glycosides, these toxins exert their effects by inhibiting the ATPase activity of a complex of transmembrane proteins that form the sodium potassium ATPase pump, (Na+/K+-ATPase). Inhibition of the Na+/K+-ATPase in turn causes a rise not only in intracellular Na+, but also in calcium, which in turn results in increased force of myocardial muscle contractions.

In other words, at precisely the right dosage, Digitalis toxin can cause the heart to beat more strongly. However, digitoxin, digoxin and several other cardiac glycosides, such as ouabain, are known to have steep dose-response curves, i.e. minute increases in the dosage of these drugs can make the difference between an ineffective dose and a fatal one.

Symptoms of Digitalis poisoning include a low pulse rate, nausea, vomiting, and uncoordinated contractions of different parts of the heart, leading to cardiac arrest and finally death." wiki

Great and very nice.It was a very interesting report.

hi . very very extera and so much beautiful . thanks

Fabulous shot of this dangerous plant, I love the pattern leading into the heart of the flower a sign to lead the bees in

Beautiful! I'm still waiting to meet one of her sisters...

Seeing this foxgloves brings back pleasant memories for me bushwalking in the South Island of New Zealand where they grow wild along river banks and the roadside.