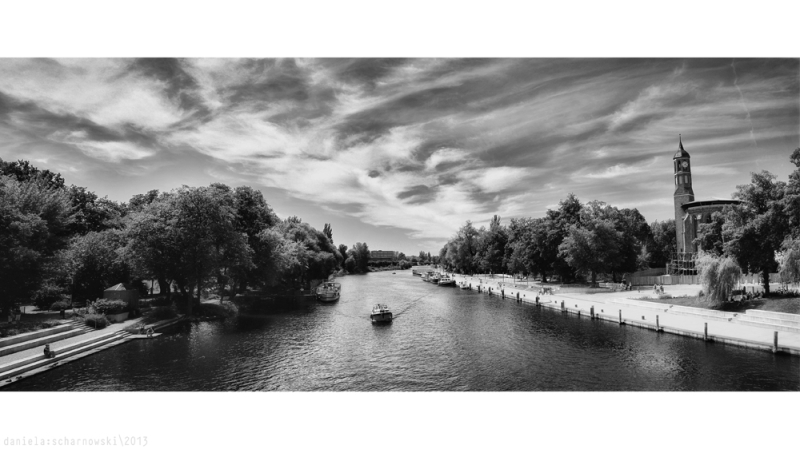 Johannis Church at the Havel river

Posted by daniela (Berlin, Germany) on 9 January 2013 in Cityscape & Urban and Portfolio.

or St John, a very beautiful ruin in Brandenburg an der Havel.
(stitched from 2 images)

It was built 1411, replacing the first spireless church (1240) built by franciscans in the same spot, nearby their monastery. The ruin of St John is another fine example of the red brick gothic style, typical for the Mark Brandenburg as well as northern Germany in general.
After the protestant reformation, when the franciscan monastery got dissolved in 1544, the monastery became a hospital.
In 1865 the last of the monastery buildings got torn down.

The church itself got badly damaged in WW2 due to british air strikes, during the GDR times there was nothing done to rescue this beautiful church, in 1985 the rest of the roof came down and since then only has a makeshift roof - there were actually plans for blasting the whole thing.

Right now there are restoring works in progress, some archaelogical research in ongoing - they seem to have found spectacular early gothic frescos under layers of plaster. Looking very much forward to visit the place again when they´re done.

A wonderful landscape and a beautiful presentation. Have a nice day.

This is fabulous daniela!

The framing is wonderful and such a beautiful panorama, pristine !~

Lovely mono, striking sky with a picturesque view below.

Beautiful pano shot and I have decided I really like city views in b&w. This is a wonderful view Daniela.

Lovely frame of the Havel and the ruined church - I remember trips to Wannsee on the Havel as a small boy when visiting family in Berlin.

Fabulous frame, everything just falls into the right positions, I think the two broad white borders help to reinforce the panoramic aspect of it.

You have very nice b-w pictures of city. The river si great! :-)

This image has been featured in 1 Remix collection.