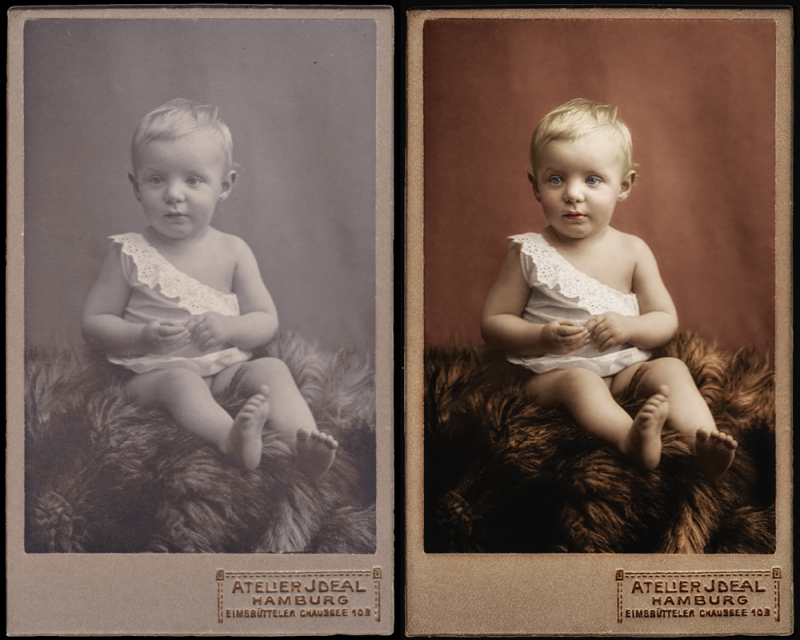 Posted by daniela (Berlin, Germany) on 27 October 2012 in People & Portrait and Portfolio.

before and after - Another restored and "handtinted" scanned photograph from the very early 20th century, I bought the original with a bunch of others from an antique-shop, they all seem to show the same - anonymous - boy from an obviously wealthy Hamburg family in various ages, with and without mother and also with possibly girlfriend or sister and wife. They are in extremely good condition, which made it easy to go nearly straight to the colouring part. I did this some months ago, but came back to it after an email conversation with my dear friend Phil yesterday, who is truly a handcolouring artist and reminded me of that series.

As I said before on other occasions, it is weird to look at the photos of other people, not knowing if there is anyone of that family still alive and what these people might have been like.

You have done a brilliant job with this Daniela, Phil is indeed a wizard at this suff, but your attention to detail is superb. I share your fascination about the story behind the photo.

Beautiful presentation. Have a nice day.

Superb work, I agree with Richard

You are very good in photo restoration, Daniela!

What a great job you have done!

Nice work, Daniela. It reminds me of a little photography-book shop (now long gone) where there were boxes of old prints, basically for sale by weight. As you say, it's a weird feeling to look through the memories and stories of unknown people...

Your work is as good as any photographer I have ever seen, your work is totally different than mine
and very doubtful I could have done this as good as you. Although come to think of it, it would be
wonderful for you to send me an image and we both work on it and post it the same day, then you
could see how your work can be better that anything I could post. This is very beautiful, so sad
that the family is no longer and these pictures of the boy can no longer be remembered lovingly by
family members. Superb work, Daniela !~

@Phil Morris: thank you a million for all your comments Phil, especially after what I expeienced yesterday - email will follow later today. This is **brilliant** idea I really love to take on as our project for 2013! I still have a lot of - also - this hamburgbabyboy - photos I haven´t even started yet working on. To see them also edited woth your magic it would be a real event! Love

This image has been featured in 1 Remix collection.