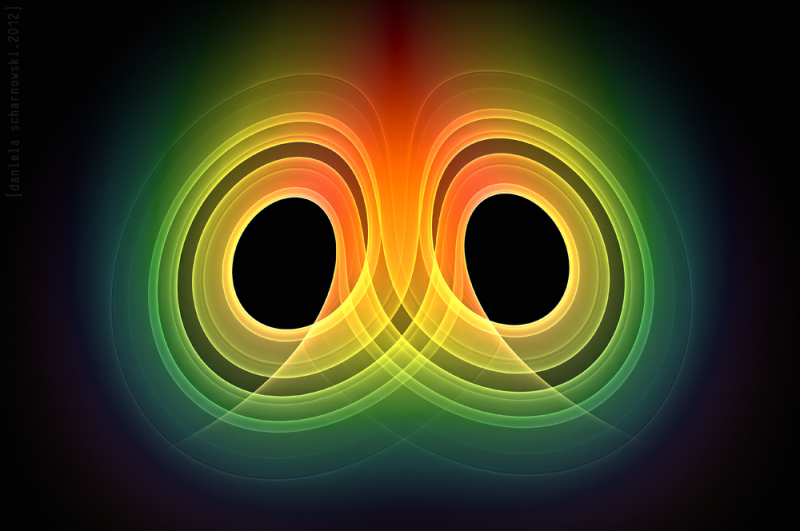 Posted by daniela (Berlin, Germany) on 14 May 2012 in Miscellaneous.

Though I´m still not in the mood for going out shooting whatever comes in focus - it´s so sold and windy angain here and my bathroom still looks like young Godzilla has had a real good tantrum, I´found some comfort this weekend in playing again with my old friend chaoscope - a 3D strange attractor rendering software.

This beautiful little mask / butterfly / insert what you think fits best/ rendering is based on an equation of Edward Lorenz.

"A beautifully simple equation created by Edward Lorenz to demonstrate the chaotic behavior of dynamic systems. This attractor is also historically important because Lorenz discovered, while working on weather patterns simulation, one of the fundamental laws of the Chaos Theory : "the sensitive dependence on initial conditions" he himself dubbed "the butterfly effect"."

"In chaos theory, the butterfly effect is the sensitive dependence on initial conditions, where a small change at one place in a nonlinear system can result in large differences to a later state. The name of the effect, coined by Edward Lorenz, is derived from the theoretical example of a hurricane's formation being contingent on whether or not a distant butterfly had flapped its wings several weeks before.

Although the butterfly effect may appear to be an esoteric and unlikely behavior, it is exhibited by very simple systems: for example, a ball placed at the crest of a hill may roll into any of several valleys fully depending on slight differences in initial position."

It's all too scientific for me at this time of morning Daniela, but I love this image nonetheless. I'm expecting to see Bugs Bunny pop his head through it at any moment :-)

This is where Science and Art meet together. Really beautiful!