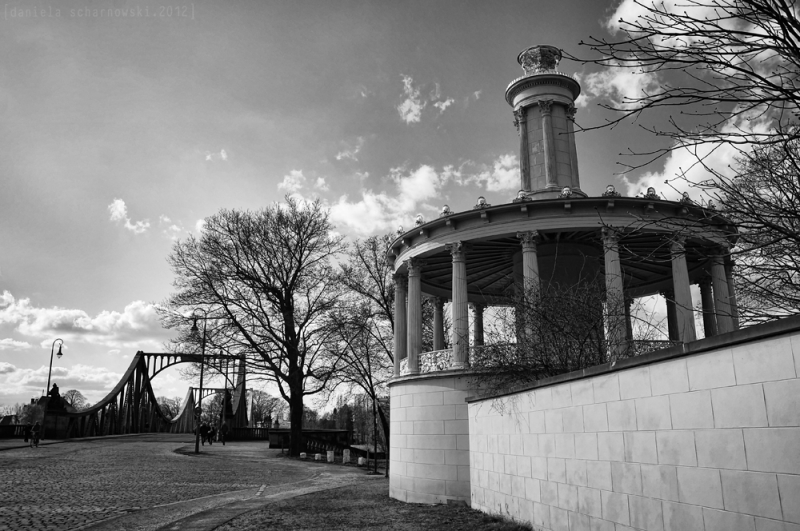 Posted by daniela (Berlin, Germany) on 17 April 2012 in Cityscape & Urban and Portfolio.

Just to show you how close they are. Maybe imagining people behind the blinds checking out the people coming over the bridge by foot, on horses and carriages is easier seeing this.

This place was during the cold war really the very end of the West-Berlin world - the border between the GDR and Westberlin was right in the middle of that bridge. It was built 1904-1907 and destroyed in WWII ( by accident it seems - the Wehrmacht had placed explosives on the pylons earlier - just in case ^^- and some soviet tank fired - woufff!) - rebuilt in 1949 as "Bridge of Unity" // Brücke der Einheit - what a sarcastic name !
After the Berlin Wall was built in 1961 by the GDR, only diplomats and allied military were permitted to cross it. (Oh, and spies were exchanged here.)
Since 1989 it is finally open to everybody and is again called Glienicker Bridge.

Fantastic composition and just perfect in monochrome, you can almost see the spies being exchanged there

Gorgeous black and white Daniela, and it has sure featured in a few films (or at least a reconstruction of it). It is so redolent of the cold war years and spy exchanges, this would be where Karla and George Smiley confronted one another.