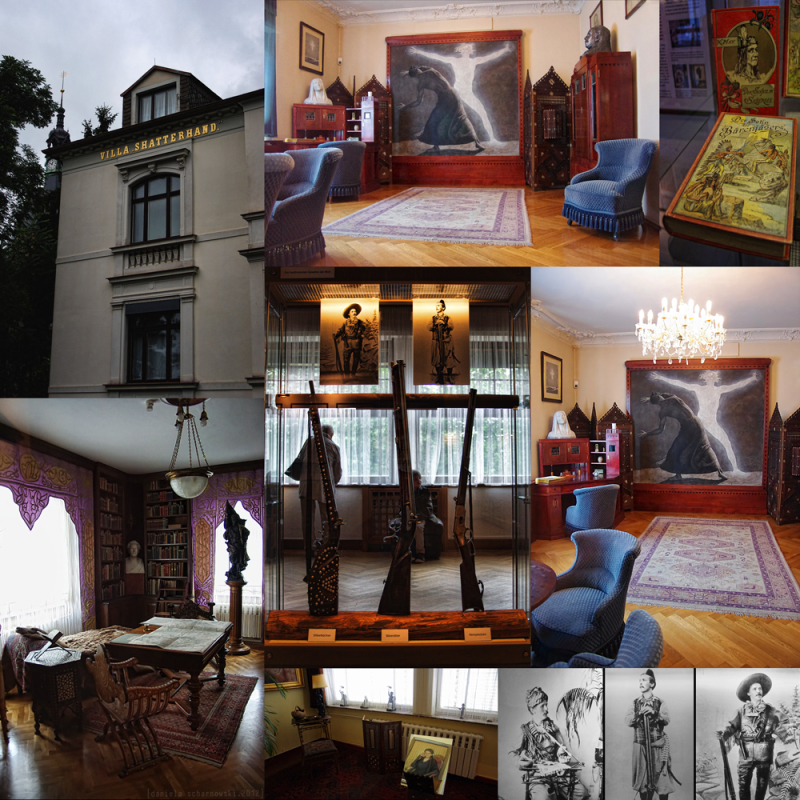 Posted by daniela (Berlin, Germany) on 7 April 2012 in Lifestyle & Culture and Portfolio.

Villa "Shatterhand." - the former living house of Karl May in Radebeul, Saxony. He bought it in 1895 or 1986 (different sources) and moved in with his first wife Emma. In the first year he added the name Villa Shatterhand in golden letters near the roof on the front side.

Behind the house is a garden in which Karl May´s second wife and widow Klara with Karl May´s friend and performer Patty Frank have built a log cabin in 1926 - the "Villa Bear Fat" as dwelling for Patty Frank.

The shots above are all done inside the Villa Shatterhand, which now is the Karl May Museum and shows mostly the original furniture.
none of the former living rooms can be entered, instead of a door there is glass - the lighting is pretty bad, reflections everywhere, so I had to use a rather high iso.

Most impressive is the giant painting in his former parlour - the "Chodem" aka "The Conscience " (Das Gewissen) by May´s friend Sascha Schneider, who also had done several book covers for May.

Also on display are the "world´s most famous guns" - the "Silberbüchse" (Silvergun), the "Bärentöter" (Bearkiller) and the "Henrystutzen" (henry carbine) - Karl May found a gunsmith who was able to build these fictional guns for him for showing his fans - when his obsession with being Old Shatterhand himself took over. The henry carbine on display is simply a Winchester Model 1866 :)

Perfectly presented, giving a real feel for this villa, that is an amazing painting

Superb montage of images from this house