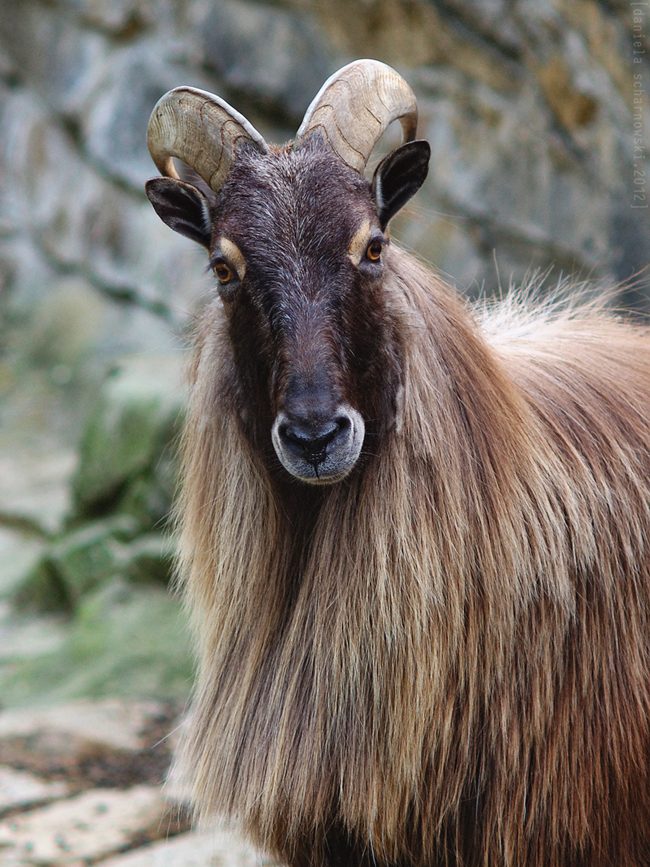 Posted by daniela (Berlin, Germany) on 5 March 2012 in Animal & Insect and Portfolio.

The Himalayan Tahr (Hemitragus jemlahicus), also known as the Himalayan Thar or the Common Thar, is a large ungulate related to the wild goat and the only extant member of the genus Hemitragus.
Its native habitat is in the rugged wooded hills and mountain slopes of the Himalaya in Nepal from Central Asia in northern Kashmir to China. It spends the summers grazing in high pastures, then comes down the mountains and forms mixed-sex herds in the winter.

It has a small head with large eyes and small pointed ears and red circles on its cheeks. The Himalayan Tahr is a goat-like animal, with small horns on its heads. Its hooves have a flexible, rubbery core that allows it to grip smooth rocks, while the hard, sharp rim can lodge into small footholds. Males are larger and have different coloration and horn structure than the females. Adult Himalayan Tahr range from 135 to 180 kg (300 to 400 lb) in weight, 120 to 170 cm in length, and 60 to 90 cm in height. It is a herbivore, subsisting on grass, shrubs, and trees. The gestation period is seven months, and usually only one kid is born at a time. The young tahr nurses for about six months, and may follow its mother for up to two years. In the wild, tahr can live up to 15 years, though ten years is more typical. (wiki)

my he has a friendly face! nice captuire

@Curly: In summer they look quite differently - this is the winter coat :D

This is a really beautiful beast, it's horns and hair are wonderful !!! Great shot