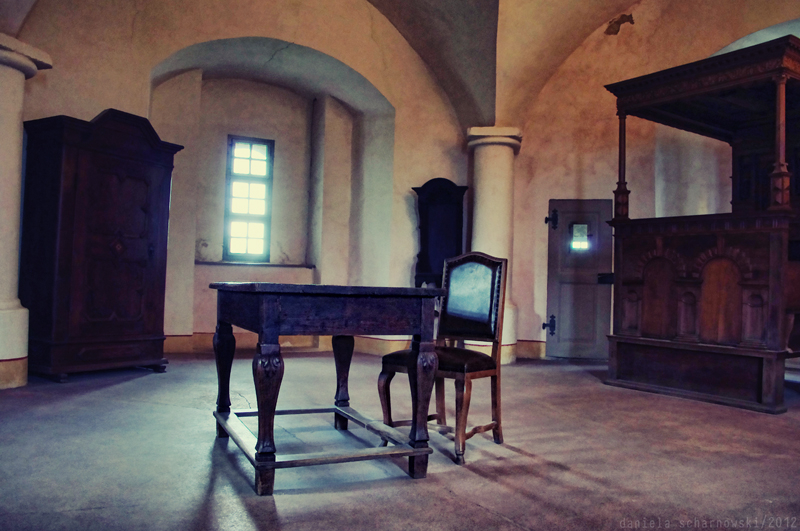 Posted by daniela (Berlin, Germany) on 18 January 2012 in Lifestyle & Culture and Portfolio.

Cosel tower - 4th floor, the room believed to have been the Countess of Cosel´s bedroom / livingroom, and in her last years the only room she inhabited. I forgot to mention, that every floor of the tower only has one room, the stairway runs in a separate smaller tower. The tower originally was concepted as a fortress tower, not as a place to live in.

As before, none of the objects shown ever belonged to the Countess, but to show the simplicity of living her life has turned to when she had to move into the tower.

The original interior was described in an account from 1765, the year of her death, at the public record office as following:
"In the room planned as a livingroom were no wallpapers, 2 very old and damaged chairs, just as much small and bad tables, one big wooden bed without curtains and the Countess´ own chair without seat-back but two armrests and 2 feather pillows on which she sat all time with the back to the oven. Because of all the smoke and grime from a lamp hanging from the ceiling, burning all nights until dawn, everything in the room had turned completely black, you couldn´t see the hands of the old bad long case clock standing on a wall anymore." (my translation, maybe not totally correct :P)

Strange to hear of her final days, her simple last furnishings and makes one wonder about
her life, love this series and beautiful photos, Daniela.

@Phil David Morris, 2012: I´m glad I could entertain you a little ;) indeed, her life must have been rather sad, left alone the fact that she got imprisoned for most of her life without having comitted any crime. Just being involved in politics at that time.

I love the processing and the mood of this image! I can feel the starkness. Very nice. Thank you for the comments!.... and it does seem like a great photography community and I like that it is more "international" than most.