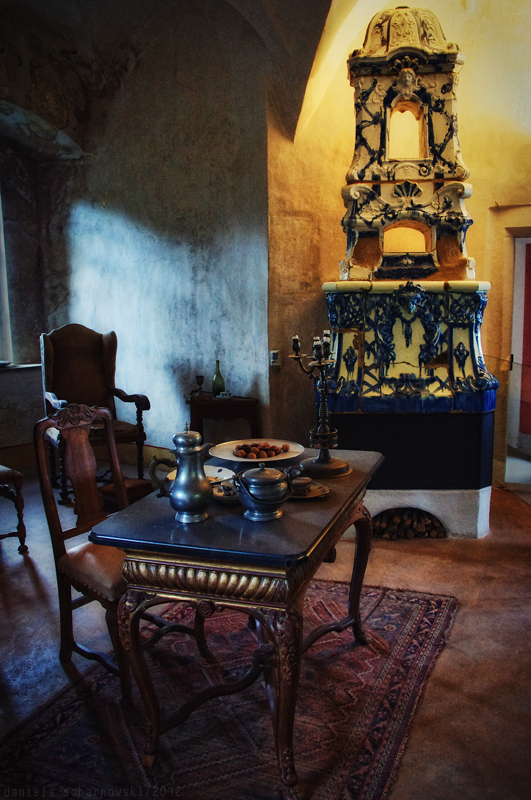 Posted by daniela (Berlin, Germany) on 17 January 2012 in Lifestyle & Culture.

Cosel tower, third floor. At least it is a room looking like a living room. Known is that the Countess in her 80s used only one room, most likely it was the room on the fourth floor.
The Countess was forced to leave the arsenal house, where she was imprisoned for nearly 30 years already, after a fire caused by lightning.
In the arsenal house, she inhabited 8 rooms on two floors with her five servants.
After she had to live in the Coseltower (then called John´s tower), she dismissed three of her five servants for the lack of space she had left.

Note: None of the furniture comes from the Countess´ possessions, just from that time.

The lighting has brought out the depth of colour here. Lovely shot

Love how you have produced this Daniela, plenty of detail in the highlights and the shadows with hardly any signs of clipping.

@Curly: found a new way of processing for complex lighting situations like this - am working now first with neutral density, then contrast, then tonal contrasts and then maybe a slight set of glamour glow (nik).

Pretty fancy stove, love how they show up in castles, nice room and beautiful lighting
for this space.

@Phil David Morris, 2012: In the Moritzburg castle we also visited there were very similar ones, even bigger. But those were the originals from that castle, in this tower not . But! the original Stolpen castel had many more buildings which simply didn´t survived wars and fires. Here is a document showing it around 1750, the time of the Countess living there.
http://upload.wikimedia.org/wikipedia/commons/e/ee/Stolpen_um_1750.jpg

Wow, that sure is a big change to what is left, but yet it must have been really
something in its day, your pictures sure have been eye-openers !