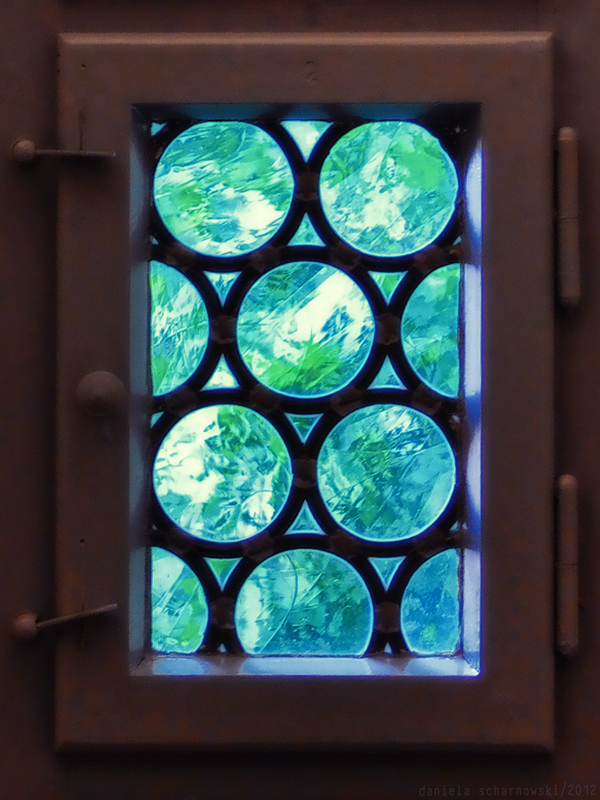 Posted by daniela (Berlin, Germany) on 14 January 2012 in Abstract & Conceptual.

Crown glass was an early type of window glass. In this process, glass was blown into a "crown" or hollow globe. This was then transferred from the blowpipe to a punty and then flattened by reheating and spinning out the bowl-shaped piece of glass (bullion) into a flat disk by centrifugal force, up to 5 or 6 feet (1.5 to 1.8 metres) in diameter. The glass was then cut to the size required.

The thinnest glass was in a band at the edge of the disk, with the glass becoming thicker and more opaque toward the center.

Due to the distribution of the best glass, in order to fill large window spaces many small diamond shapes would be cut from the edge of the disk and these would be mounted into a lead lattice work and fitted in the window. Known as a bullseye, the thicker center area around the punty mark was used for less expensive windows.

Crown glass was one of the two most common processes for making window glass until the 19th century. The other was blown plate. The process was first perfected by French glassmakers in the 1320s, notably around Rouen, and was a trade secret. As a result, crown glass was not made in London until 1678.

Crown glass is one of many types of hand-blown glass. Other methods include: broad sheet, blown plate, polished plate and cylinder blown sheet. These methods of manufacture lasted at least until the end of the 19th century. The early 20th century marks the move away from hand-blown to machine manufactured glass such as rolled plate, machine drawn cylinder sheet, flat drawn sheet, single and twin ground polished plate and float glass. wiki

...and hence the Urban myth that glass is a liquid that sags over time. Crown glass varies in thickness as you pointed out, so if the window maker did the obvious thing, and had the slightly thicker glass at the bottom, people who have only seen absolutely flat 20th century glass think that it has sagged.

@CElliottUK: there is really a myth like this out there? never heard that oO

A beautiful kaleidoscope of colour, and glass has been around for thousands of years,
nowhere as much used or as brilliantly as in the last 200 years, particularly the last 100
have really fascinated me. Wonderful photo.

Wonderful image of this fantastic old window. I feel very lucky that I once watched an old tradesman go through the process of producing cylinder blown glass and remember being very surprised to see the process start by blowing the glass. Really interesting history Daniela thank you.

What a beautiful piece of work...interesting information, thank you for sharing.