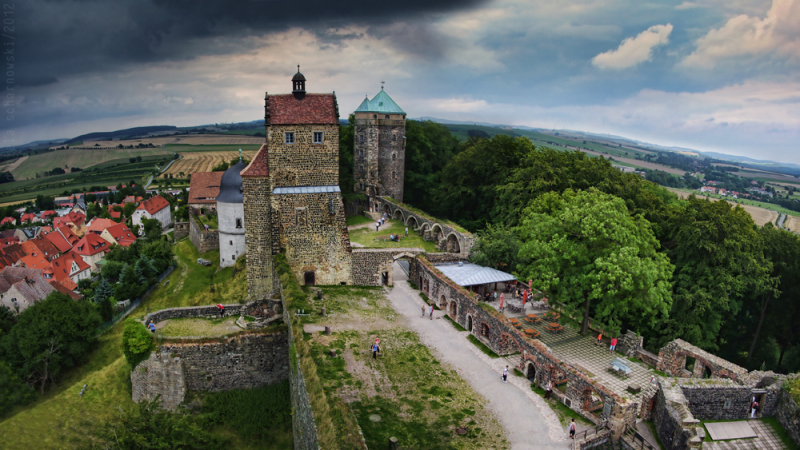 Posted by daniela (Berlin, Germany) on 12 January 2012 in Landscape & Rural and Portfolio.

4 shots, handheld from the tower I ´ll post for yesterday.

The two towers you see here are the seiger tower (left) and the John´s tower or Coseltower on the right. the Countess of Cosel was imprisoned there after the 3 stored living house burned down. The remains of that house are on the right, where now the open air cafeteria is. In the very right corner is the Countess´burial site. The big white stoneplate marks her grave, which is in the blocked crypta underneath.

In 1713, Anna Constantia was banished to the Pillnitz Castle, but in 1715 she managed to flee to Berlin, Prussia. For this, she was condemned in Saxony as a Landesverräter (state criminal). In Berlin, she hoped to get her hands on Augustus' secret written marriage promise, which was in the hands of her cousin Detlev Christian Rantzau, held in the fortress of Spandau.
However, the countess failed to retrieve this important document and was arrested on 22 November 1716 in Halle an der Saale and exchanged for Prussian deserters in Saxony.
Augustus exiled his former mistress on 26 December 1716 to the Burg Stolpen, where she was kept for the next 49 years until her death.

After the death of August the Strong (1 February 1733) and during the reign of his son and successor, August III, the countess' exile was apparently not lifted, although there is no certainty about that or about the details surrounding her continued residence at Burg Stolpen. It is curious that the countess did not use the opportunity to flee, twice presented to her (in 1745 and 1756), in both cases the Saxon guards having fled before advancing Prussian troops. She died in Stolpen. wiki

You see the story of the Countess of Cosel is quite a thriller.
I´ve bought a book about her life on that castle, which has a lot more information on her life and family than the wikipedia article, but translating all the important stuff to english is something i can´t atm.

Great history and drama Daniela, bit of a dark tale eh?
Excellent shot to encompass just about all of the castle.

@Curly: Thanks Curly. It indeed is kind of a dark tale, and I think it´s unique in the history of Germany. For example: she still owned the Pillnitz Castle plus all the agricultured land around that when she got imprisoned. At that time, the prisoners had to take care of their food and everything they needed to live, also servants. So she had most of the 49 years on Stolpen castle her necessaties coming from Pillnitz. At some point the king took the Pillnitz castle from her and she and her servants started starving.

This is a great photo. Be very proud of this one.

A wonderful story and image!

I love your photo, like a fish eye and your viewpoint certainly is as spectacular as this
highly interesting story of the Countess's life. I love a good story with a brilliant photo
and this certainly fits both bills. What a beautiful complex of buildings, your view just
soars through the stratosphere !!~

@Phil David Morris 2011: Thank you, I had no idea only 4 shots would make such a nice pano :) I read about the Countess´life before that holiday, but being there , standing in rooms she lived in did make it more personal. Not easier to understand though, why she didn´t leave the place when she had the chance. Maybe she thought she had nowhere to go?