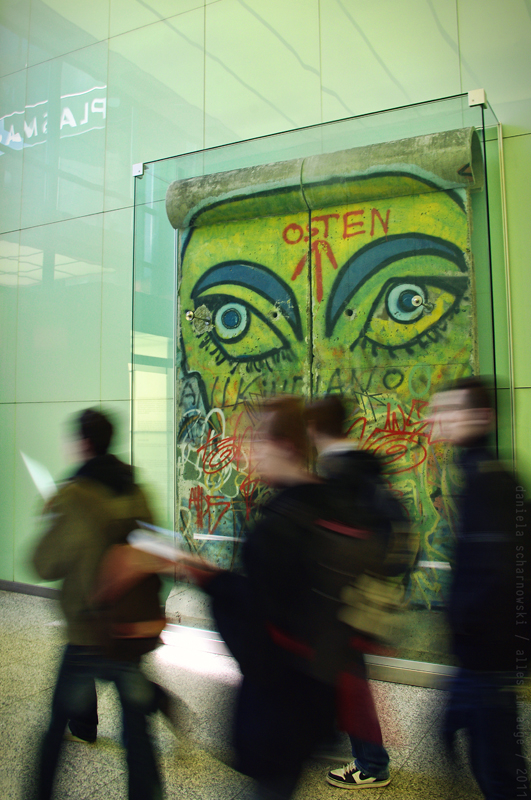 obviously not a headturner

Posted by daniela (Berlin, Germany) on 23 December 2011 in Documentary & Street and Portfolio.

To my surprise I found one of the last segments of the Berlin Wall in a hallway of the Europa-Center.
But only after I had a chat about what has changed there with the old west-berliner security guys about the tacky 80s design interiors. Fun guys btw.
The Graffiti "Osten - East" with the arrow was a westberlin joke: We were living in the only place on earth where East was in any direction ;D
("East" was /is still a colloqiual term for the GDR, as well as "Zone" (Soviet Occupation Zone) or simply "over there" .)

Berlin tourists often moan there is very little of The Wall left to be seen. They are correct - almost every part has gone in the first years after it literally has fallen down. For example to museums all over the world.
I think it´s a shame they haven´t left some segments here in place along the former Westberlin border to make history more experience-able (if such a word exists). My sons used to ask me where the Wall was too.

In the 80s the Europe-Center was one of the places we used to hang out as teenagers ... now the interiors are still there (you´ll might see over christmas, have no intentions of doing a xmas special;)) but the spirit has long gone.

I really am a bit sad about all the changes that happened after the Wall came down - which of course was a good thing! - but somehow many of my personal history landmarks have gone.

I can understand your sentiments Daniela, local culture should always be available to the local people, however this reminder of the east speaks of forever being watched.
Have a great Christmas!

Hi Daniela....
I wish you and yours a wonderful Christmas and a Happy New Year!
Maria

My wife often tells us of her stories of going under the wall on a school trip in the 1970's. Nice shot and really interesting documentary Daniela