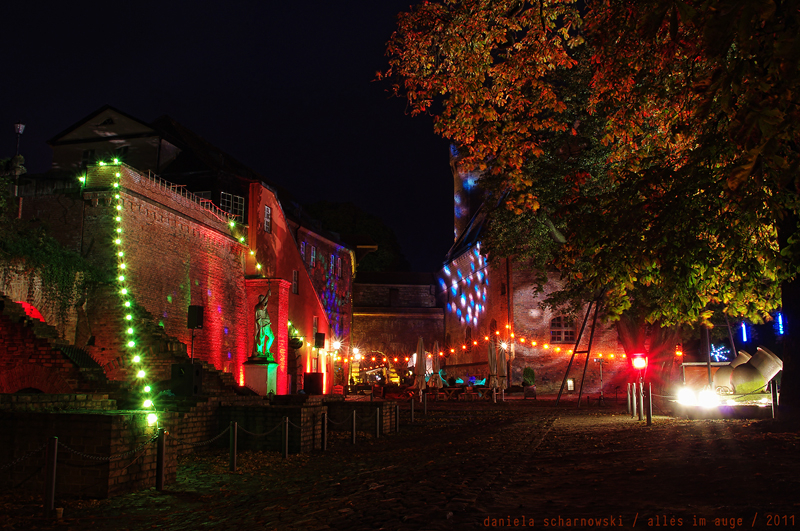 Posted by daniela (Berlin, Germany) on 14 October 2011 in Cityscape & Urban and Portfolio.

Berlin´s annual Festival of Lights has started and I will be doing at least 2 photowalks there - given that the weather is dry, but last weekend the Spandau Citadel had their own version of it.
Guess who went there. ^^

[ The Spandau Citadel (German: Zitadelle Spandau) is a fortress in Berlin, Germany, one of the best-preserved Renaissance military structures of Europe. Built from 1559–94 atop a medieval fort on an island created by the meeting of the Havel and the Spree, it was designed to protect the town of Spandau, which is now part of Berlin. In recent years it has been used as a museum and has become a popular tourist spot. wiki]

the tree on the right it's beautifully glowing, and so is your watermark! :)
a gorgeous scene, Daniela

@Maria Draper: haha, i didn´t like the watermark in white here, had to go for colours ;)

It's that time of year again! Looking good as always daniela!

Really pretty night scene with all the lovely colour :-)

Fabulous shot...lucky you to take the photo walk and to catch the lights here. Europeans have these great light shows on the walls of fine old architectural buildings that we do not replicate here in USA (Not that many old castles and fortresses, I guess. TeeHee. )

Visualaccent from somewhere in the, United States

Very nice night photo, colorful and with plenty of details. I like the fact that you used small aperture (F/13) which created those "stars burst" effect on the light sources. On your next picture (good also), where you used F/4 you don't have that. For me those "stars" are adding some dimension to the picture and sort of Christmas atmosphere. Bravo, good job!

@Visualaccent: Thank you - for this pic I used a tripod and an exposure of 25 seconds - the other one with the wider aperture was taken during a walk with my kids around the yard and I used (first time ever) the sensitivity priority modus (you set the ISO and the cam dies the rest) because my kids weren´t able to wait for me setting up tripod etc ^^ But you´re right - I also like the longer exposed shots showing stars better.

I remember you doing this last year-doesn't time fly!