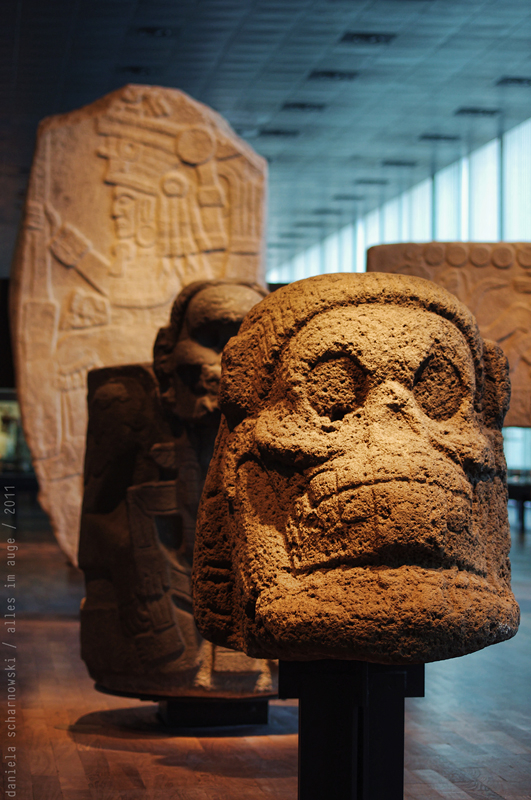 death is all around

Posted by daniela (Berlin, Germany) on 2 October 2011 in Lifestyle & Culture and Portfolio.

Some weeks ago we visited the berlin ethnological museum, which has a rich collection of south & north american, polynesian and african items.
.
"The Ethnological Museum in Berlin is one of the largest ethnological museums in the world. It houses half a million pre-industrial objects, acquired primarily from the German voyages of exploration and colonialization of the late nineteenth and early twentieth centuries. It is famous for its reconstructed houses from around the world, its boats, and its many Benin bronzes.
The museum includes one of the first ethnomusicology collections of sound recordings (the Berliner Phonogramm-Archiv)[which is absolutely superb btw], a film archive, a children's museum, and a museum for the blind."
.
Needless to say that a day isn´t enough to see everything.
Haven´t found time to post anything from that day so now´s the time.

Nice presentation. I don't feel "death" here, but I fell something humorous.

@Hiro: I personally have no problem thinking Death to be a quite humorous entity. Chose this title for "death/skull" is being displayed everywhere in mayan artworks. ;)

The one at the back looks Aztec/Mayan.Amazing folk, pity they spent so much time eating each other!

@CElliottUK: Yep, mayan it is, sry forgot to mention this. Most of the mesoamerican items were bought in guatemala back then. But I never heard they were canibals :D

@Christine: I will go there again this year, for all this beauty in stone and wood.

I love the texture and light on this skull, fascinating information and a place I would love to visit one day

@Jules: If you´ll make it - bring time :) the ethnological museums aren´t filled up with tourists like all the other more famous exhibitions here. a very relaxed place.

I love how you have put this shot together, all the elements are well grouped in a wider perspective, nice work.