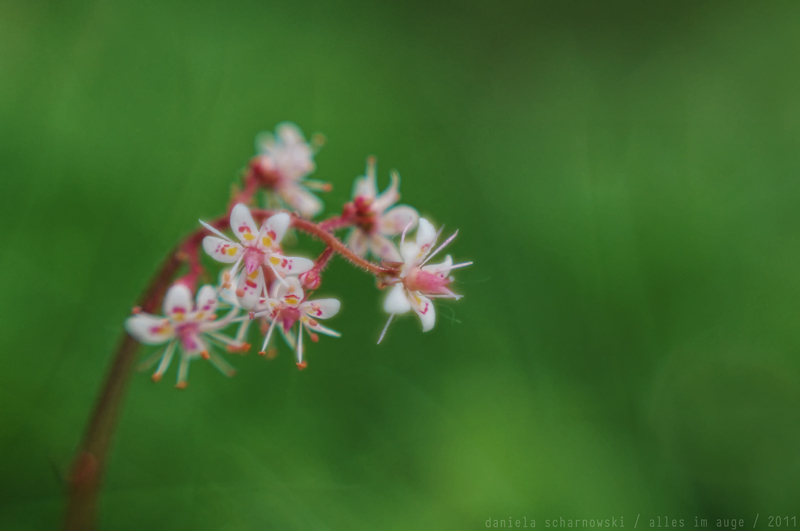 Posted by daniela (Berlin, Germany) on 19 June 2011 in Plant & Nature and Portfolio.

also known as London Pride.
my mom got this plant in the 70s from an old lady neighbour who had lots of it in her garden.

Aunt Wiki knows stunning details about this little flower:
"Alternative names for it include St. Patrick's Cabbage, Whimsey, Prattling Parnell, and Look Up And Kiss Me. [ In Germany, we call it Porzellanblümchen = porcelain flower ]
The name is sometimes applied to any of several closely related plants of the saxifrage genus, but the "true" London Pride is a hybrid between Saxifraga umbrosa, native to the Spanish Pyrenees, and Saxifraga spathularis (which is the plant to which the name St Patrick's Cabbage more correctly belongs, coming from western Ireland). The hybrid has been known at least since the 17th century.

London Pride is tolerant of dry, shady conditions. It grows to a height of 15–30 cm (6–12 inches) and provides rapid ground cover without being aggressively invasive, and in late spring produces a mass of small pale pink rosette flowers growing from succulent stems. It will grow well in neglected or unfavourable urban spaces where few other flowers flourish, and is a common garden escapee.
In particular, tradition holds that it rapidly colonised the bombed sites left by the London Blitz of the early 1940s. As such it is symbolic of the resilience of London and ordinary Londoners, and of the futility of seeking to bomb them into submission. A song by Noel Coward, celebrating London and the flower, achieved great popularity during the World War II years. In the language of flowers, London Pride is held to stand for frivolity, and its day is 27 July, but this is not widely known." Indeed. It isn´t.

I haven't seen one of these for ages. And it would have been in my Auntie Ada's garden, back in the 70's. It was obviously the "must have" plant back then

Glad to see you give this charming plant 'pride' of place. It is very deserving of your tender image of it. :-)

A wonderful story and a fantastic dreamy photo Daniela!!

so beautiful with peaceful colors!

the details on the petals make this a truly amazing plant!!