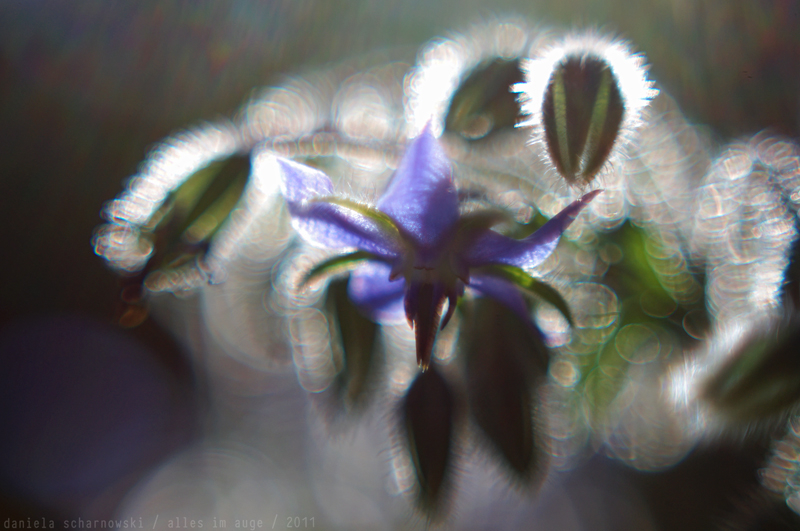 Posted by daniela (Berlin, Germany) on 17 June 2011 in Plant & Nature and Portfolio.

Borage, (Borago officinalis), also known as a starflower, is an annual herb originating in Syria, but naturalized throughout the Mediterranean region, as well as Asia Minor, Europe, North Africa, and South America.
It grows to a height of 60–100 cm (2.0–3.3 ft), and is bristly or hairy all over the stems and leaves; the leaves are alternate, simple, and 5–15 cm (2.0–5.9 in) long. The flowers are complete, perfect with five narrow, triangular-pointed petals. Flowers are most often blue in color, although pink flowers are sometimes observed. White flowered types are also cultivated. The flowers arise along scorpiod cymes to form large floral displays with multiple flowers blooming simultaneously, suggesting that borage has a high degree of geitonogamy. It has an indeterminate growth habit which may lead to prolific spreading. In milder climates, borage will bloom continuously for most of the year.

Vegetable use of borage is common in Germany, in the Spanish regions of Aragón and Navarra, in the Greek island of Crete and in the Italian northern region Liguria. Although often used in soups, one of the better known German borage recipes is the Green Sauce (Grüne Soße) made in Frankfurt. In Italian Liguria, borage is commonly used as filling of the traditional pasta ravioli and pansoti. The leaves and flowers were originally used in Pimms before it was replaced by mint or cucumber peel. It is used to flavour pickled gherkins in Poland.

I love this!! Great effect with the boukeh.

The breakdown in focus for this flower is a work of art, making it appear precious
and rare, not to mention a work of art you have produced. Superb beauty.