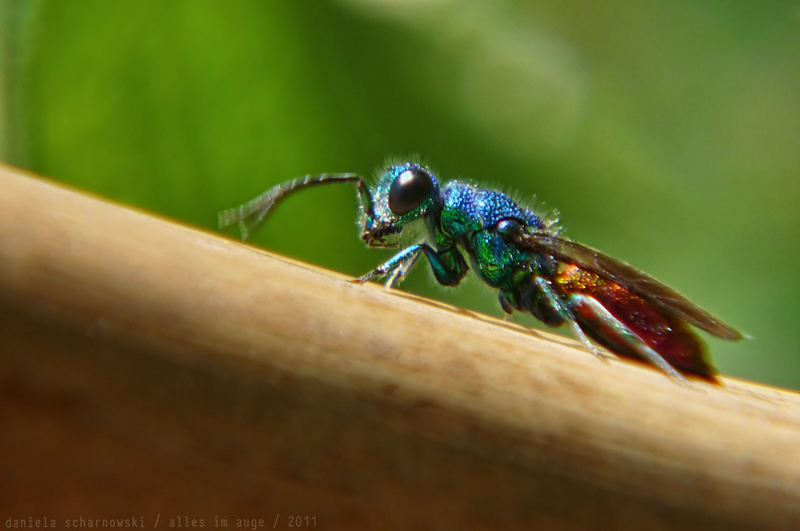 Posted by daniela scharnowski (Berlin, Germany) on 26 April 2011 in Animal & Insect and Portfolio.

This is the very first time I´ve ever encountered this species.
English name is Rubytail wasp, german´s Gemeine Goldwespe or Feuer-Goldwespe They are up to 12mm - but the size can differ - due to the different situations when growing up.
I hadn´t got my "good" diopter with me that day and had to borrow some other lens from my son... makes quite a difference in clarity.

"There are several species of Ruby-tailed wasps. This is the one most frequently seen. The head and thorax are greenish-blue, and the abdomen is red. As they usually appear in bright sunlight the vivid metallic colours of their bodies appear very jewel-like.

Ruby-tailed wasps lay their eggs in the nests of other solitary bees and wasps. When the eggs hatch, the larvae eat the bee or wasp larvae. For this reason they are sometimes called 'Cuckoo Wasps'.

They do possess a stinging organ although there is no venom and they are harmless." (uksafari.com)

One of the most memorable photos that I have ever seen of this wasp, Daniela.
I am surprised by the regal beauty its colors have and this capture is textbook
incredible on all levels. 5***** 's !!~

what a brilliant blue color! and the hairs.. quite an amazing shot!

They are very beautiful... I like the soft feel to this image :)

Great capture! I see them every now and then in my garden but this year I haven't seen one yet and I never was able to make a good picture!

This is a fantastic macro Daniela!!! Superb sharpnes and wonderful colors!!

Wow, such a pretty 'lil critter! I've never seen one in the UK