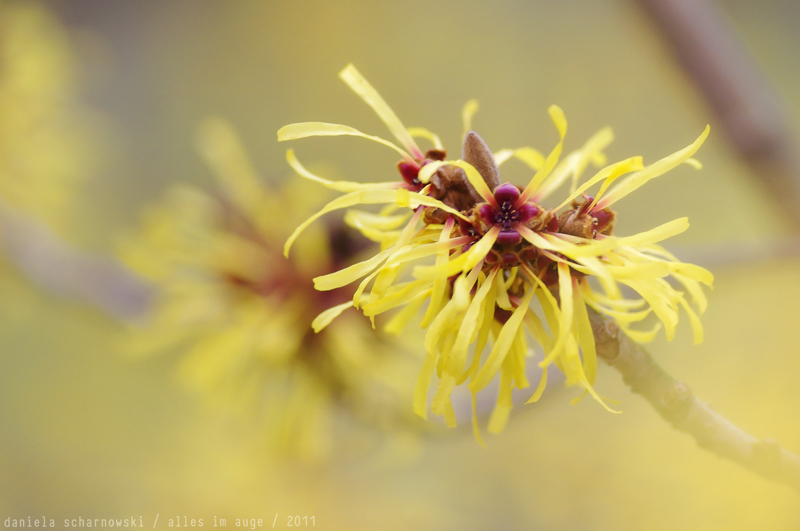 yellow beauty of the cold

Posted by daniela scharnowski (Berlin, Germany) on 15 February 2011 in Plant & Nature and Portfolio.

Every year I wonder why this beautiful and weird plant decided to flower in winter... no bees, no pollinators anywhere. So why?
Our hamamelis in full bloom on weekend.

A beautiful, delicate, and tender shot. Love the 'mirror' image repeated in the background. Bravo.

@DULCIE: Our bush is very old and has a lot of branches - it´s not easy to get a shot without any of them in the frame, plus the bad light we still have here... I´m very happy with what I caught that day - all the other shots from the hellebores and snowdrops were so bad, I´m ashamed to show ;)

Beautiful shot of this Witch Hazel, I wonder what pollinates them?

@Christine: Spike got a very good answer but you saw that already ;)

love the colors on this! I'm not familiar with this flower.. this winter bloomer. but I really like it!!!

@marci: It´s beautiful and a real treat for the eyes in this time of the year!

good questions. Does it smell nice - it kinda looks like winter sweet ^^

@kitty: Oh yes it does! It has a very light, lemonlike greenish fragrance but when you cut a branch for your home, the room will be full with perfume ;)

Ah, witch hazel. It's one of my favourites, perhaps because it offers these little sprays of colour at the "dead" times of the year, or maybe just because it's a bit "weird". :-) There's a number of them in the nearby arboretum, with flowers ranging from yellow to dark red.

It's pollinated mainly by the hardy insects who hang around late into the autumn and early winter, and by those that appear briefly during the occasional warm spells (like the 10-14 C temperatures we've had here the last week or two). It's also able to self-pollinate if need be. The flowers are very hardy - they can survive frost, snow, even being encased in ice. The fruit and seeds take up to a year to develop (which means you see often see fruit and flowers on the same branch); the little pods burst open in autumn, sending the seeds flying with an audible snap!.

@Spike: I saw pictures of red hamamelis - but never saw any in real life - remarkable! I adore them for their fibre-petals, so unusual - and of course so delightful in winter!! If they bloom and strong frost comes back - they roll in their petals and will open it when the temperatures are more around 0°C again. (like we´re having right now) The origin of these are the himalaya in heights where hardly any insect lives... so the wind pollination is the most likely source i think. I admit my question wasn´t meant very scientifically - more philosophical ;)

Well whatever the reason, it's a lovely flower that you have grabbed so well

A very interesting plant, and well-framed. The color must be a welcome sight in winter.

@Julie Brown: Oh, yes - it surely is! Now the hellebores start and also the snowdrops - but the light was so bad on weekend, the results weren´t any pleasant :(

Oh, I love this - so delicate and pretty. Great focus and compo too.

Lovely. what a strange flower. Have never seen them.

the answer is simple - just to make us happy :)

@Elora: The best answer I heard so far!

@Christine: hehe, yea Spike seems to be a walking encyclopaedia ;) Anyway, the origin of this bush is the himalaya, where hardly insects live in these heights... but wind they have a lot ;)

I managed to get a photo of one of the red ones and posted it today (Thursday). I'll try to find the others when I have a bit more time (I might even have some in the "archives" somewhere...)