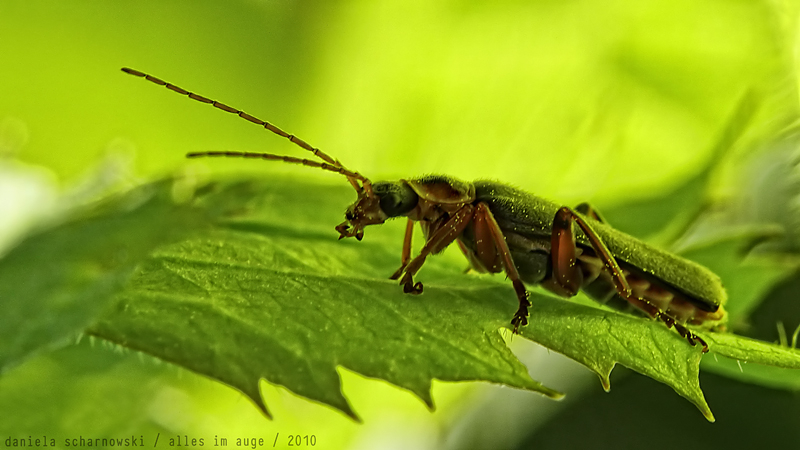 how to become a macronaut

Posted by daniela (Berlin, Germany) on 30 June 2010 in Miscellaneous and Portfolio.

picture: Cantharis fusca, the soldier beetle or Soldatenkäfer in german. Their colours (not so bright here, cause he´s relaxing under a sunshade, err leaf) reminded folks of the old soldier uniforms, allegedly the french called them "the prussians" and the germans called them "the french" ... ^^
.
Since many people ask me how I did this or that in macroshooting and inspired by the ongoing tips of dang/Tom, I thought about writing a sort-of-tutorial about my workflow.

First of all - I learned a lot of stuff about macros simply by asking ( a lot of asking ;D) a fellow photog from another (german) community, whose macros really are great. ( have a look if you like). He also works with a zoom bridge (Panasonic FZ50, the older sister of mine) and diopters.
.
Since then I learned a lot more just by doing. I will describe my technique for doing insect macros with a Panasonic Fz28 & FZ35/38, both super-zoom bridges, and a Sigma life-size attachment lens which has about 5 dpt and is not a real diopter, for it´s made of 2 lenses in 1 group. This piece of glass doesn´t show any distortion unlike many other diopters.
.
Another useful accessoire I often use is a diffusor / reflector, not too big. Mine´s a cheap 5-in-1 version = diffusor, reflectors: neutral, black, silver and gold, which does fine.
For I don´t like flashing my models I have to use the standard lightsource - the sun, problem here is that many insects love to sit under leaves and in the shadows where you need higher ISO settings.
Exactly what I try to avoid with my Panasonic - it makes beautiful pictures in high quality as long as the ISO is not higher than 200. So I use the reflector for throwing sunlight on my model, or in the brightest sunlight I hold the diffusor between the sun and the insect, so the highlights won´t be blown.
.
My standard settings for macros are
1. aperture priority [almost ever f8, that may sound wide open, but actually is the smallest aperture my cam can do - and things work a little different with zoom cameras, can´t explain why, maybe Tom can]
2. centerweight metering!
3. spot focus
4. auto white balance - I do trust my cam here, see 6.
5. adjusting the EV to - 1/3. to avoid blown areas
6. RAW shooting helps a lot, but I don´t do it all the time.
.
Other macronauts will have other settings and workflows, so please just take from my technique what you think is useful and suits your work. Most of the tips will work for DSLRs too.
.
The first thing to bring is patience, that´s ironic for me, cause I´m not known as a patient person... but behind a camera I am.
I mostly shoot insects in our garden, that has some benefits: I know every inch of that area, every flower and bush and I´m often there (not in my direct neighbourhood) so I know from observing which insect lives there and feed on which plant. Even though, there are always surprises.
.
I mount my cam on my tripod and adjust it to my usual height, what will be about 30-45 cm. My working distance with that lens is also about 20 -40 cm, I need to get close to them. Since I often shoot in the garden, where I don´t have to mind protecting the ground because of the lawn, I also often use a folded blanket, lay or kneel down and use my ellbows as tripod - but the quality looses if you don´t have the brightest light around)
But wait, many insects seem to be disturbed by humans coming so close.
here are some tips how to ambush an insect ;)

Insects have no flight distance at all! This is the distance a potential predator [you] can come close, before the animal will fly or run away.
Insects essentially react on movements - mostly on horizontally movements.
.
So you better
1. approach an insect ve.ry slow.ly and don´t wave your arms /tripod/water bottles around
2. always go on to them head-on, don´t try to sneak around
3. mind your breathing - moving air also counts as movements
4. don´t throw your shadow on the model if it enjoys a sunbath
5. don´t wear gaudy / bright-coloured clothing for you might become a little too attractive. Plus don´t wear your best robes ;D ( btw I wouldn´t use any perfume either)
.
I always study the chosen insect through the cam as long as possible before I start shooting. to get the composition right and to move the cam on the tripod along with the insect if necessary.
-----------------------------------------------------------------------------------

I can´t think of more right now, so please ask and/or discuss here.

Ah, the world of shooting insects is fascinating, but I lack the patience. Wonderful detail in this image.

@Kala: I only get patient when behind a viewfinder ;D

WOW!!! What an amazing macro shot! Superb detail and clarity. Thanks for the very interesing info.

First your lines : so generous to share this, i'll remember for the day i'll jump in macro, many thanks Daniela ! (I should do the same for street shots : don't put your brightest dress ;))) Now the pic : geez, how gorgeous ! Looks like a still out of a 3D-movie, light & colors are as terrific as the glorious details on both the insect & the leaf ! Seemed powdered with golden sand ! That's because YOU are the magician here !

@k@: Thank you so very much Karine ;) Writing this down was also good for me, cause I don´t think anymore when I´m in macro mode.

I enjoyed reading about your process, Daniela. It is helpful to see how others go about making images. I also do not like to flash insects or birds, and I use a diffuser and reflector as well for macro subjects. Thanks for the instructions you gave me for putting two images in one frame. I will try that when I get time. I am getting ready to travel to the mountains for a landscape workshop in a couple of days.

Great explenation of your workflow Daniela. It works realy great for you. I like the capture and the green shadow on the beetle. Great composition and beautiful sharpness. Great work girl!!

@Marcie: ;) Thank you very much Marcie!

Thanks for all the tips :) Now all I need is a macro lens! RE: This picture - i love how he glitters, it's amazing!

@Elora: heehee, the glitter is pollen =D I found a specimen of my most beloved lens the other month for 0.99$ at ebay, just have a look there - Marumi is also a beautiful glass!

Great shot and great info! Thanks!

just fantastic, think the thing besides that awsome detail, is the green light reflecting on him, makes him seem at home :) Bravo!

@Martin: Oh he is =) I won´t put any models out of their surroundings to get a better view on them. Did you get my email the other day?

I appreciate your tutorial, I also have a semi useful bridge camera, but next to no knowledge about insects, their habitat, or their feeding customs. I have a park just a few yards away, a very big park, so perhaps when I find a few spare hours I ought to go there sit in the grass and see what I can spy!

I have noticed that the side on shots, like the one above, give you the sharper results as dof is very limited at these magnifications.

@Curly: Thank you! Since I still am saving for a macro lens for my pentax, I ´m stuck with the bridge for macros, but the quality is beautiful so I´m glad I still have it. The more you watch insects the more you learn, just by watching. I don´t know so much before watching but after a shooting I pull out the insect books and search the net for more infos on them. And yes, the side shots are generally preferable with the limited dof - and you have more space to set the focus ;)

Great macro !
Thank you for telling us how to do it.