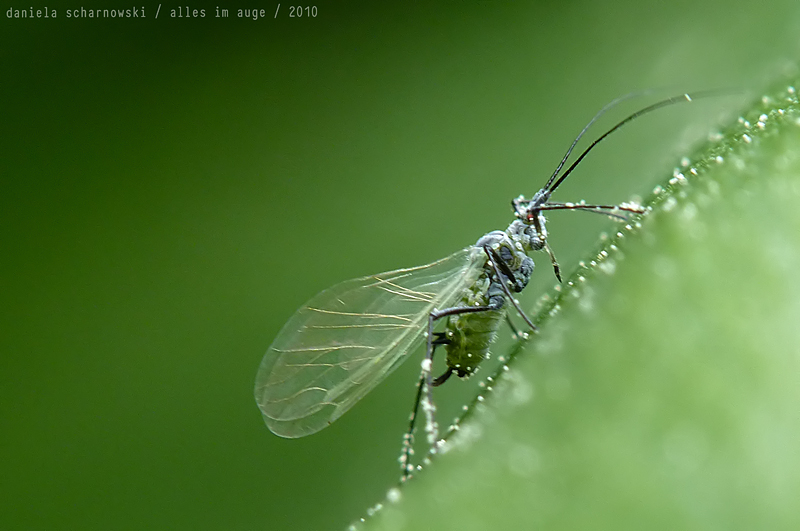 Posted by daniela scharnowski (Berlin, Germany) on 19 June 2010 in Animal & Insect and Portfolio.

The same aphid as yesterday, but here you can see its sucker they use for puncturing the plant and drinking the nutricious plant sap.
.
"Many aphid species are monophagous (that is, they feed on only one plant species).
Aphids passively feed on sap of phloem (the living tissue that carries organic nutrients) vessels in plants, as do many of their fellow members of Hemiptera such as scale insects and cicadas. Once a phloem vessel is punctured, the sap, which is under high pressure, is forced into the aphid's food canal. As they feed, aphids often transmit plant viruses to the plants, such as to potatoes, cereals, sugarbeets and citrus plants. These viruses can sometimes kill the plants.
.
Plants contain low densities of the nitrogen compounds needed for building proteins. This requires aphids to consume an excess of sap to satisfy their nutritional requirements. The excess is expelled as "honeydew", out of the recta of aphids, in such large volumes that in some instances it can "fall like rain".Aphid honeydew is rich in carbohydrates, like the phloem it derives from." wiki

Your macro are no doubt among the most beautiful which I was able to see on Aminus. What a neatness and what a sharpness this one!

@Marie LC: That is a great compliment, thank you very much Marie! 1 and a half year of training ;)

Great select focus Daniela!! I wish you a great weekend and a lot of shooting;-))

@Richard: Thanks Richard! I hope you soon come across some lovely creatures on your trip ;)) Hmm, and I guess there won´t be much shooting for me this WE, painting th kitchen is on program... ;D

He is in a remarquable an unusual attitude. Love the details on his belly, wings and on the leaf as well. Truly awesome.

@Florence: Hello Florence - I was so happy when he finally decided to pull out his "engine" to start feeding ;)) Thank you!

The MaJor from TM HooD, Iran

@The MaJor: Thanks a lot mate ;D have a great weekend!

Such a lovely aphid with wings and beautiful red colored eyes! Great macro, especially when you know how small they are in real life, great job!

@Monique: Thank you Monique, the aphid shots really got me some sweaty forehead ;D

Fine details in this macro. I like its colors!

SO much detail Just wonderful.

@Becky: Thnak you very much Becky!

Do you use any "extras" for making your macros, tubes, bellows etc?

@Curly: I have to admit I still just use the panny bridge with my extraclass *sort-of-diopter* sigma life-size attachment lens which has about 5 dioptrin. It isn´t a real diopter, for it is built from 2 lenses in one group, which corrects any distortion and somehow adds a silky finish, the light you can catch with this is incredible. . Edit: the only available size is 52mm, I use a step-down adapter to make it fit. It is a historic lens, which was an accessory for some kind of manual macro lens. Sometime you´ll find them on ebay, like I did some weeks before (it´s always good having some back up lenses of this stunning piece of glass), prices go from 0.99 $ to 70 €, seen it all. With the amazing zoom capabilities and lens quality (Leica) of the FZ38 it is simply unbeatable - at least til i can afford the sigma 105mm for the k-x. And btw - this not cropped. If I crop any macros it isn´t for magnification, just for enhancing the compo. Cheers, Daniela

Beautiful light in this one and nice compo (as usual :-) ) And you know what? I even noticed the second pair of wings :p:p To me the amphid seems a little lacking the "tack"-sharpness i"m used from your images but maybe it is just the compression... (or my tired eyes :D)
Hope your plumber did some good job by now ....

@Johan Dierckx: You know what? The only person I waited for to say this isn´t as sharp as usual was you! And that´s a big compliment to you, because that means you were looking really close ;D No, somehow I didn´t managed it to focus perfectly - maybe my eyes were tired when shooting ;P - the only thing really well focussed is the front - nope, back antenna - BUT (big but) I thought this picture interesting enough to post it, for i think not many people saw an aphid ready to feed, like me for example. Oh, well, my plumber and also the brick layer did a fine job actually, but - again a big but - this afternoon, when I was ready to take off and buy some beautiful yellow paint for my shiny new kitchen to have a painting job tomorrow- water was coming from the ceiling - some %&§"!* from upstairs managed to overload their toilet and the pipe couldn´t handle it and let the water pour into the kitchen above me and also in mine. So I have to wait for the ceiling and wall are dreid up again, and for the plumber to fix the pipes in the other flat... I´m so tired of living in chaos Johan, I was so motivated and now I´m really down. I´ll go out tomorrow and shoot the sorrow away, even if it rains.

another great macro!! but how do you manage to get such sharp pictures?

@Joy: Thank you Joy! For macros I mostly evr use a tripod go keep the cam steady, makes a big difference! Then I use a rather small aperture (on my panasonic f8 is the smallest) and I always use the spot focus. I use only the centerweight metering for macros, will give you the best results, my opinion. The rest is up to you - bringing patience is a big plus ;) I do a lot of shots per insect, not only one or two, most of my macros are the result of at least one hour of work in the field, depends on subject and light. I never delete any picture on the cam cause you can´t really judge it on that tiny screen. I always shoot macros in aperture priority mode, so it may come to some longer shutter times, that´s why the tripod is a must. Cheers, Daniela . oh, edit: here´s the thing, when I have resized my shots for the web to 800px width, I do some very subtile sharpening - after the resizing! If you have a photoeditor where you can set the sharpening radius and strength: I set radius to 0,5 px and the strength somewhere between 30 and 60. really subtile.

Sharp enough or not, i'm mesmerized by his pearls-like stairs !

@k@: pollen-pearls, yeah the were everywhere. Maybe "pollution" derives from that ;D Thanks karine!

This and prior image a nice!

I must say, you make these little buggers look exotic. This is a beautiful presentation.
I was so happy to read your explanations of how you achieve your macros.
Such beautiful work. You inspire me !!

@Dulcie: You have no idea how happy your comment made me!
Inspiring somebody else who works so artfully is quite an honour! Thank you very much Dulcie!
I´m working on a sort-of-tutorial, or better a documentation about my macro workflow I will be posting soon here, maybe end of the week, there might be some tips for you in too ;D Cheers, Daniela