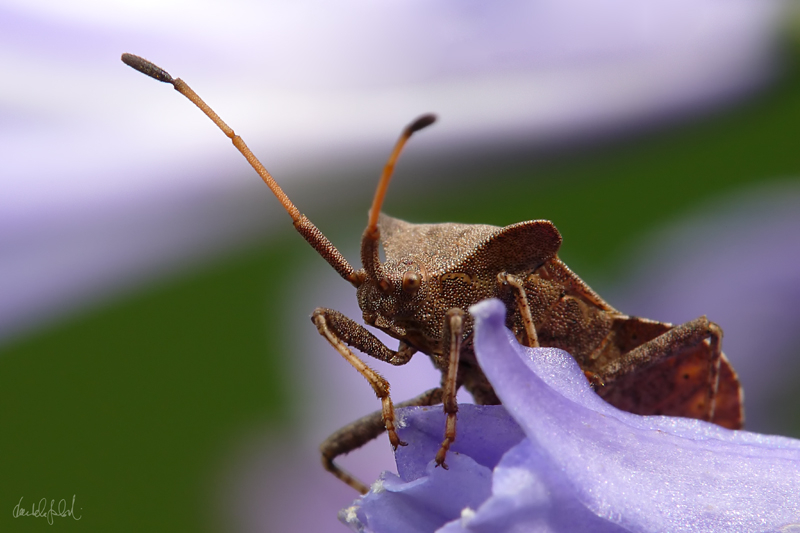 Posted by daniela scharnowski (Berlin, Germany) on 22 March 2010 in Animal & Insect and Portfolio.

;]
Same guy (ok, that I´m not sure of but the species is the same) as the last two days but different location.

Coreus marginatus - commonly called the dock bug, is a species of squash bug. It is a speckled brown insect with a broad abdomen, and is common in most parts of Europe. It is often found in dense vegetation, such as hedgerows and wasteland, where it mainly feeds on the leaves and seeds of docks and sorrels.
Saum- oder Lederwanze in german.

Great! Great texture on the bug, and smooth background.

@dang: Thank you - that was easy in the bright sun ;D

Another brilliant capture - I love that you have captured every single detail of this ugly little knight.

@kiwisa: The more pictures I make of these folks the more i think that the ugly models are the most interesting - a butterfly always looks nice ;) Thank you!

Now that I can see all the detail on him, he looks even better...Really enjoying these!

Very good macro photo, where you can see the smallest detail, really good focus and colors!

@Sussi: Thank you Sussi! I hope they come out to play very soon =D

Very interesting bug series, Daniela!
Beautiful sharp details and lovely blurry background:-)
These bugs are so cooperative with a photographer, they keep cool and sit still;-))

@Marleen: As long as people anjoy it, I can post them ;) Got folders full with bugs and other sixlegged friends... I thought I need to present them now before I start collecting this year´s harvest ;D

So, you fell in love with the warrior ? Ah, understandable weakness, he's such a great hero with so much seduction in his antennas & tones !

@k@: give me a man in armour and I won´t care for the species ;D

@Thea: naa, these guys are from last summer - but I actually met these Vuurwantsen guys the last days ( there´s a lime tree round the corner where multiple generations use to hibernate in the ground and when the temperatures are right, they sit on the tree´s stem in the sun, having pina colada and a swim in the pool ;D

Fabulous macro! I like the contrast of colors and textures here. The soft flower provides a nice juxtaposition to this rough and brown insect.

@Yonatan: Thank you very much Yonatan!

Lol..real party guys I understand:) and all that in the middle of Berlin:0
(cool link,thanks,guess you can only do that if you are a paying member
I never succeeded in placing one that actually worked) Greets!

@Thea: ? really, only as a paying member? You´mark a word, press the url-button and replace the http part with the complete url you want to link to - I´m sure I did it before upgrading *scratch* ? I guess...

Yikes the quality is remarkable. I guess this is a crop?
Even so the magnification and sharpness are astounding.

@Curly: Hi Curly - no cropping here! not even denoising - thanks to the light! 5 dioptrin achromatic ;)

perfect !
I'm amazed in the kind of macro's you can create with that camera... Your technical skills are realy high standard !

@Johan Dierckx: I guess it´s way easier with a bridge and a good diopter than with a dslr. The first month wasn´t easy at all but after a lot of practise I know my distances ;)
I´m getting a dslr in about 2 weeks and I´m very excited - a german photographer friend said I wouldn´t get much better with dslr than I do now on macros, hmpf. The most thing I dream of is not having so much noise in the shadwy shots.
Is there by chance any quality but not highend ( =affordable) macrolens you would recommend? I´m a big sigma fan but I think I can´t afford one in the next year...

If you're looking for something to shoot (besides bugs), thought you might find this of interest, as they had a photo in the Chicago Tribune of the hotel's 25 meter tall aquarium in the lobby: http://www.radissonblu.com/hotel-berlin

@John: This is a nice place I know of course, but it would be more architectural shooting here, the glass box is cylindrical - and just too big =)
Thanks for the suggestion, wil ge there some time again for sure!

Brilliant macro of this handsome knight!

amazing details, thanks again for bringing us into a whole new world.. beautifully done!