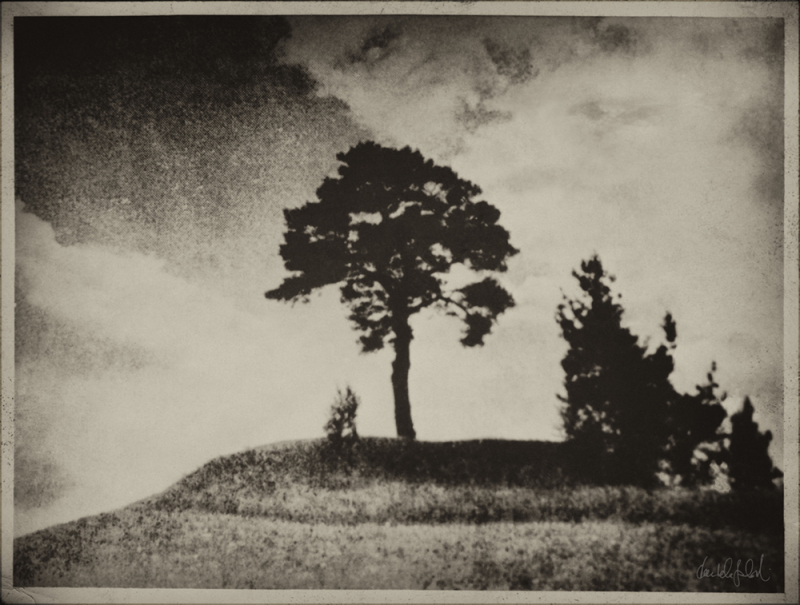 Posted by daniela scharnowski (Berlin, Germany) on 4 March 2010 in Landscape & Rural and Portfolio.

near *Prussian Eylau* / Preussisch Eylau, East Prussia where my grandfather grew up- today it´s called Bagrationovsk,
This tree was planted as a nature monument in remembrance to the Battle of Eylau, maybe at the 100th anniversary in 1907?
From the size of the pine I ´d guess it to be at least 30 y. The photography is a paper print - I don´t really know when this was common... so I think it´s taken around 1930 - again pure speculation. I don´t even have an idea who of my family captured this.

Size is 11,30x8,55cm and the photo is really that rough. I just cleaned up the worst scratch in the sky and most of the specs. Then I chose the antique plate settings from nik silver effex and that´s it. I decided to leave quite a big amount of blotches on the framing, I didn´t want this document to loose its character completely.

Before and after can be seen here.

@john4jack: Ha, that stroke my mind too =D Cheers, Daniela

Early landscapes, i don't have anything like that in my old family pictures. I think i'm the first to do them.
This is interesting to see their perspective.

@Gary: I have a few other landscape shots from that time, for example my grandfather did a picture of one of his hiding places during wartime. He was always a person of interest to the SS and got xtimes arrested for political activity.
It is so different to know the stories by telling than to see the pictures and read his notes on the back, much more personal and "impacting" and teaching me how important it is to photograph things of your own history for your kids and theirs.

this was taken by a family member? so interesting at that time, someone aspiring to be a photographer, and the tools of their trade in that day, so very interesting, im enjoying this very much, Thank you!

@Martin: Yes, I think my grandfather or some of his brothers had have a box camera (Kodak/Agfa) then, my mother did too and we still have that camera. I learned that photography was always present in my family since cameras for "everybody" were available.
Doing this project I do learn a lot about our family and history of photography, as for history itself.
I´m happy some others are enjoying this too, thank you!

@DarkElf: Thank you! It´s something I enjoy very much - making my own pictures is much easier I learned ;D

What a great and honourable old pine tree. The feeling of the photo is still the same after you've processed it.

@Marilla: I´m very careful not to destroy the antique look with them - just want to clean up and fix the worst things.

the person who took this had such an eye. i suppose photography is in the family. :)

@lil-ing: Well I hope so ;)
I really love this little picture, it´s amazing that this has such an energy and beside from being an artistic expression from an early time of photography for anyone it´s also a rare document of the time before war in gernmany. Thank you!