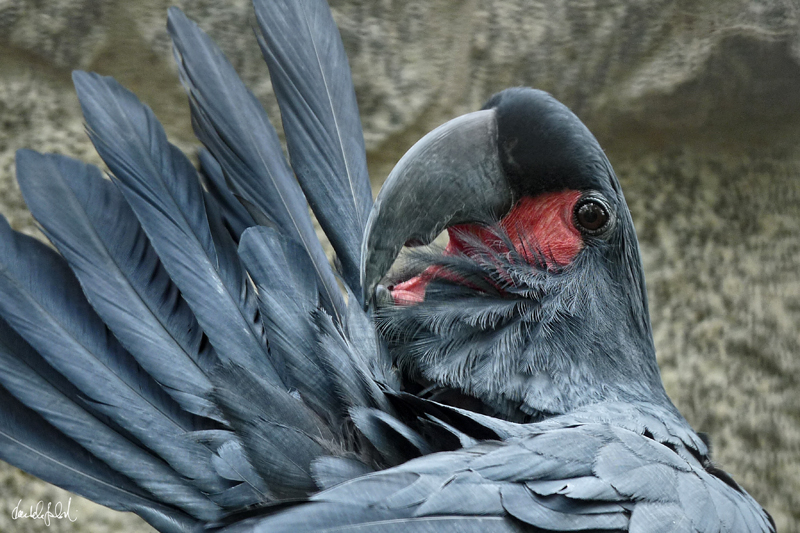 I got the feathers fine...lala..lala

Posted by daniela scharnowski (Berlin, Germany) on 12 January 2010 in Animal & Insect and Portfolio.

Another incredible bunch of tones, this amazing gray is beautiful, I wave Hello to you too (though i'm damn short-winged ;)

Made me think of the song, "Pretty, I feel pretty, so pretty and witty and wise."
Or something like that.

@Pied Crow: Ha, thank you, that was exactly the title I was thinking of too, instead of remembering I translated a german idiom - that´s west side story right?! Update: Thanks again, now I can´t get that song out of my head...^^

Makes me think of..I got the power!!
Amazing colors and details (again:))

@Thea: Uh thanks Thea ;) You should have seen him using his beak with the precision of a surgeon to do his feathers ;D

Fabulous detail . . love the close-up look to this like we are sharing the preening moment !

@rajeev: many thanks rajeev!

I should have guessed, this Silly day again... Hey Cookie, you looked much better yesterday!

@Marilla: hehe, yesterday´s shot was taken after his beauty time =)

Love the title, he really does look as if he is showing off.

Nice shot and great 'pose' of the bird!

great capture - what a beak!

The cussing parrot refused to stop, so after several warnings his owner tossed him in the freezer and slammed the door. Much squaking and thumping ensued, then suddenly, silence. When the owner finally opened the door the parrot stood resolutely silent, then said "I apologize for my rude behavior, it won't happen again. By the way, what did the chicken do?"
Very nice shot, almost as if he's waving.